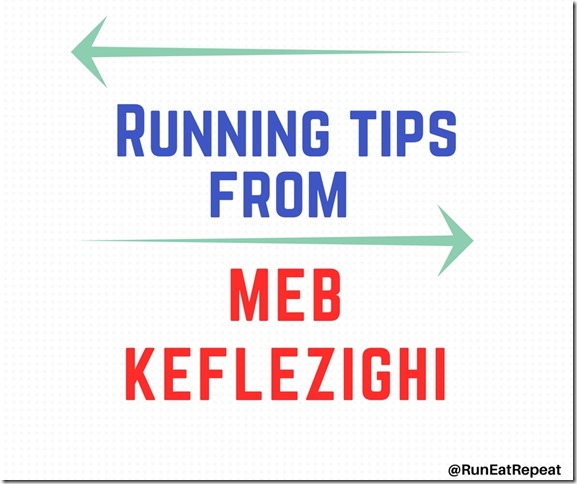 Hi! I had the amazing opportunity to chat with Meb Keflezighi a few days ago. He is arguably the best male runner in the US and has a list of accomplishments  so long you’ll have to check out his website to get the complete run down (see what I did there).

He’s not only a professional runner but he is one of the most friendly famous runners I’ve ever met. His advice is realistic and helpful to ‘normal’ runners. I’ve met him a few times before and was so excited to have a good chunk of time to pick his brain about running, marathon racing, weight, food and more! He never disappoints with the helpful and realistic running advice.

I chatted with Meb because I was about to run the LA Marathon and the title sponsor Sketchers, is also Meb’s sponsor.  He didn’t run LA but is hard at work training for the New York City Marathon. He ran the Olympic Marathon trials in Los Angeles last year but it’s a different course. The LA Marathon was the first marathon he watched AND he went to UCLA so I think there’s hope he might do it one day.

He’s tentatively planning on  taking a break from competing in the full marathon distance after the New York City Marathon this coming November. Then, he’ll probably focus on half marathons. He said they are, “half the distance, double the fun”. <- I 1000% agree with that!

When I get the chance to interview anyone I try to get in at least a few questions for tips and tricks that will help my followers. I also ask what they ate that day – it’s always so interesting and sparks good convo. Meb shared a lot of great tips and we talked about his diet and weight. I expanded on this and will be sharing more about that part of the conversation soon. 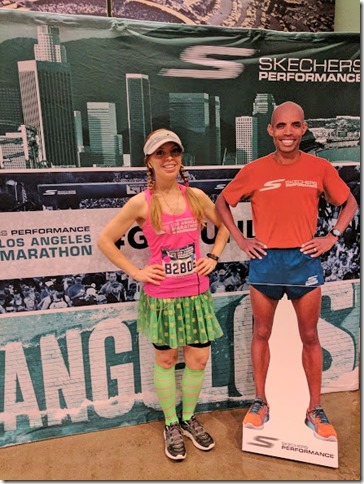 Meb Keflezighi’s tips on Running, Injury Prevention and Mental tricks for half and full marathon training

Do you have any tips on runners who want to go from the half marathon to a full marathon?

“Routine is important, you have to stick with it to hit your goal. The hardest part is putting on those shoes and getting out the door. Find a training partner. Make plans to meet up with them.

Enjoy the process. How you get there is the journey itself.  It’s rewarding and a great sense of accomplishment. Most people know you’re a runner and ask about it – they’re usually impressed. Remember to have fun with it. “

Fun?! It’s a little surprising that Keflezighi, a professional runner racking up 100+ miles per week – still thinks of it as something that’s supposed to be fun. But he thinks remembering that might be the reason he’s been so successful for so long in the sport. He enjoys it as much as he can and just does his best every day.

I try to have as much fun as I can with running. Once you get out the door there’s exhilaration and excitement that you did it. The night before you set a goal you want to hit the next day.

If you’re feeling good you can turn your 4 mile run into a 6 mile run. Some days I feel horrible. I’ll have 12 miles planned and end up doing 8 miles.

I’m all for hard work and working smarter, but I make sure and let my body do what it needs to do. “

On actually getting out the door and sticking with a training plan Meb says he’s a morning person and runs early.

“I’m a morning person. If I don’t do it in the morning it doesn’t look like it’s going to get done in the afternoon. Some people love working out in the evening, for me that’s not the case. I’m early to bed, early to rise. “

Do you have tips to prevent running injuries?

“Be in tune with your body, check in. Check in with your quads. Glance down at them when you’re running. If you notice one of them has more definition – do some single leg squats. If one calf feels tight – spend some time stretching it. Evaluate your body. Try to be aware of your signals and  in tune with your body. You can even look at your shadow and check your running form – watch what your body is doing.

If you feel a muscle is weak – don’t wait until you get injured. I’d rather run one mile less and use that time to stretch or strengthen my muscles.

You have to stretch. You might be able to get away with not stretching for a while, especially when you’re younger but I know a lot of elite athletes that don’t do those things and don’t stretch or do the drills and end up getting injured. “

Another way he tries to avoid injuries is by using an Elliptigo. It’s an elliptical machine that you can ‘ride’ outside. He uses it instead of doing a second run – he used to do two runs a day. He runs 12 times a week = most days he workouts out twice. When he’s training for a marathon he runs about 100 – 130 miles a week. Now he supplements some of his runs with the Elliptigo and rides it 3 to 5 times a week.

On a typical day he’ll run 10 to 12 miles in the morning, do his drills and stretching and then head home for breakfast. Then, he’ll use the Elliptigo in the evening.

*Note: His book ‘Meb for Mortals’ gives you all the details on his stretching and drills workouts.

He also stresses the importance of what you do after a run this includes  rest, stretching and fueling.

“Distance runners will have a great tempo long run and instead of hydrating with proper protein and rest they want to have a few beers, that’s not as good as doing the other work (drills and stretching). You’re still working even when you put your head on the pillow.”

So it sounds like he doesn’t hit the beer garden after a race. We chatted about his diet and he said he prefers sweets to beer most of the time. He admitted his has a big weakness too…

“I have a sweet tooth, so I want dessert more than beer.

Nutrition is important, it’s huge. You are what you put in your system. My weakness is I like to eat a lot of food. I can put it down like an offensive lineman or shot-put thrower. I try to eat healthy, whole wheat, brown rice, healthy snacks.”

(We talked about what he eats in a typical day and if he has to keep a certain race or running weight. More on that soon.)

“Go around the block, don’t sprint. Just go out for a jog, I wouldn’t even say a ‘run’ because running gives people an idea of running out fast, sprinting. Even when I’m running a marathon we’re not sprinting in the beginning, we’re getting in the zone.

Go out to a park and walk it and then jog it as slow as you can. Eventually you’re going to do it faster and faster and before you know it you’re doing a 5K.” 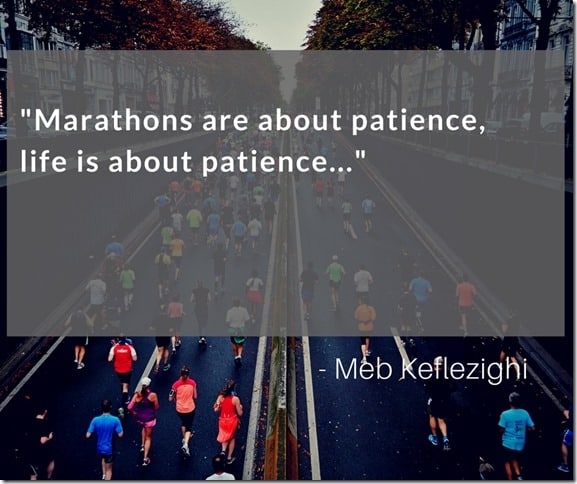 Meb’s advice for running a marathon:

“It’s going to hurt at one point. We hope it hurts at mile 20 and not mile 6, but you’re waiting for it. Think about people less fortunate than you. I’m hurting but I’m going to get to that finish line. Walk if you have to – I’ve walked before. There are people out there that don’t have the chance to finish the race – you have the chance to walk. Not everything is going to go your way. Put your head down and keep going forward, appreciate the moment. Take every moment in or you’re going to regret it.

A lot of people throw in the towel, but if you’re able to walk or jog keep going, whatever it takes.

If it’s easy everyone else would do it. Just because things are not going your way in the last 3 miles doesn’t mean quit. Remember, ‘I trained for this, I deserve to get to that finish line’. “

Wait. 90% mental? I mean, I know that’s common knowledge for normal runners but you’re an elite athlete. Do you think it’s 90% mental for you too?

“We go through the same journey, even though we make it look easy. It’s hard, but you want to make it look effortless. You don’t want your mechanics to be broken or people see that you’re hurting. We’re all hurting at mile 21, 22. We’re digging deep within ourselves. We try to make it look as effortless as possible.

Marathons are about patience, life is about patience. There are people who are trying to PR or BQ and miss their goal by 2 minutes. Maybe you went out too hard and need to go out slower. Let your body warm up. At mile 18, 19 start doing negative splits.

The marathon is much more pleasant if you don’t hit the wall. You’re racing against yourself. Go your pace. Find people to run with, consider a pacer. And doing negative splits is the way to go. It’s hard because you want to get it over with as soon as possible. Run within yourself.” 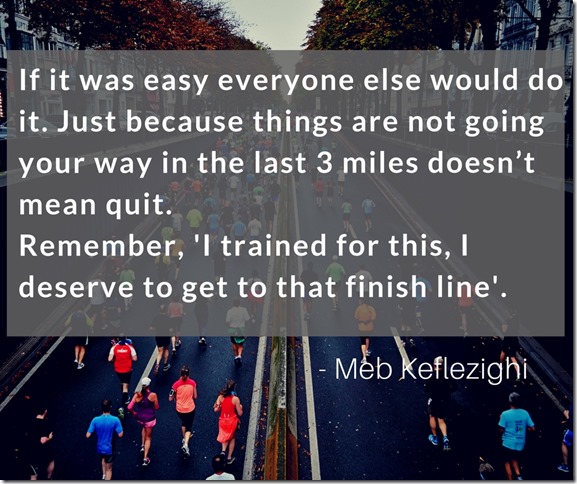 The whole ‘you might have went out too fast… do negative splits’ think really hit home. It’s something I’m going to work on until I get it right.

Question: Do you think running is 90% mental? How much is mental? How’s your mental game?

Disclaimer: I am not a doctor or registered dietitian. The views I express are mine alone, based on my own experiences, and should not be taken as medical advice. I am a certified running coach, but am sharing my own training – not providing a program for you. Please speak with a medical professional before making any changes to your diet or exercise. Affiliates: Please note that affiliate links and sponsored posts may pop up on RER from time to time. I greatly appreciate your support!  END_OF_DOCUMENT_TOKEN_TO_BE_REPLACED