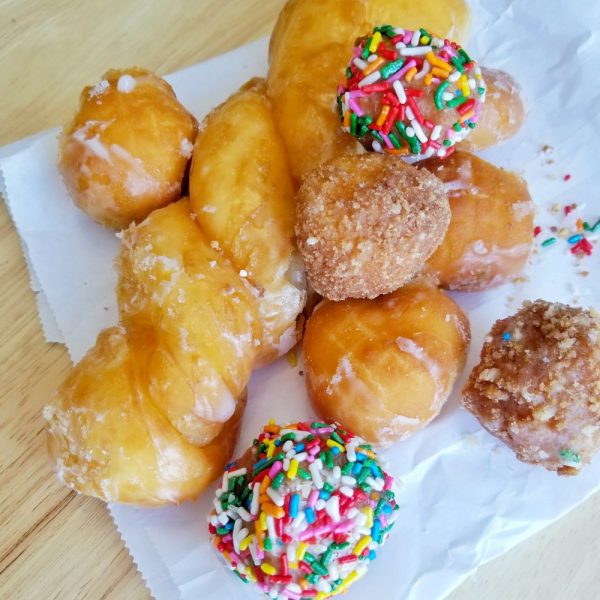 I randomly stopped at the donut shop yesterday while running errands. I wanted to get donuts after my long run recently but the day got away from me and my favorite place was closed by the time I was going to go. And the next day I didn’t really care anymore.

Yesterday the craving was back and I got a big fluffy glazed donut and 8 donut holes.

This is noteworthy because it’s not noteworthy. I almost wasn’t going to mention it but the donut holes were so cute and I get a lot of questions and comments from people about intuitive eating so I wanted to share…

I used to think of donuts as a super indulgent food that I had to earn. I would only get donuts after a super long run.

A couple of things changed my mind set on this…
First I realized that the calories in a donut were less than the calories I was eating at night binging after a day of not eating enough. (Perspective yo!) A donut isn’t that high in calories in the big picture.

Second I realized that people eat donuts all the time and I don’t think all those customers did a long run that day. I don’t have to run 10 miles to justify eating a donut. With that mindset I’d have to justify everything I ate in relation to what exercise I did that day. It would make me crazy and stressed and reduce me to a machine that processes numbers of calories in vs. out every single day instead of listening to my body. That is no way to live (or enjoy food).

Third I realized that I would rather enjoy my favorite treat than deny myself and just keep thinking about it or try to find some healthy replacement that wasn’t really satisfying. Basically, denying myself led to a binge that was higher in calories than just eating what I wanted in the first place.

Fourth I was helping support local businesses via my donut addiction!

If you’ve ever had issues with restricting foods because you thought they were going to make you fat or they were ‘bad’ than you might feel me.

A donut is not going to kill you (unless you have donutitis – an allergic reaction to eating donuts).
A green smoothie isn’t going to cure you.

Use common sense and fuel your body like you love it.

I hope that you know how to balance being kind to your body, fueling it well and enjoying treats without guilt.

(And if you think I’m obsessively talking about donuts like a crazy person and you can’t relate… consider yourself lucky. Because when you struggle with food, your body image and you’re stuck in an unhealthy place – it sucks. There’s food everywhere and you need to eat everyday. It makes you crazy, sad, stressed, frustrated, etc… )

Have a good, healthy, happy day! And maybe a donut for good measure!


Do you RUN while listening to the @RunEatRepeat po

Some extra cheese for your feed... 🧀

Disclaimer: I am not a doctor or registered dietitian. The views I express are mine alone, based on my own experiences, and should not be taken as medical advice. I am a certified running coach, but am sharing my own training – not providing a program for you. Please speak with a medical professional before making any changes to your diet or exercise. Affiliates: Please note that affiliate links and sponsored posts may pop up on RER from time to time. I greatly appreciate your support!  END_OF_DOCUMENT_TOKEN_TO_BE_REPLACED