Last Night I made a super quick and easy dinner out of these two items – a box of whole grain Spanish rice and a can of black beans. The rice was on sale and I thought I’d give it a whirl. 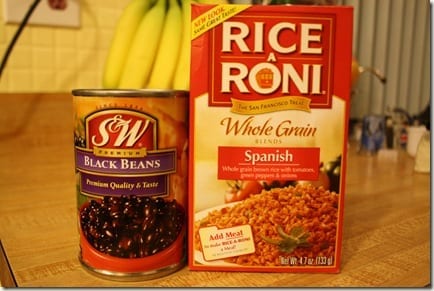 I cooked the rice according to package directions and then added a can of beans. Top with a little shredded cheese if you’re feeling adventurous and serve with broccoli. It doesn’t get much easier. 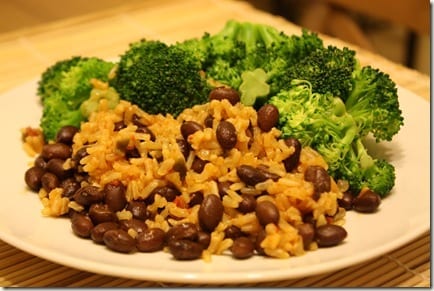 Today I had a delicious Mexican Meatless Meal all planned, but “life” got in the way and I didn’t have time to make it. And by “life” I mean the fact that I’m still trying to catch up on school and had a nervous breakdown after I got back a quiz where I got 6/20, but I digress.

“No I’m not crying. My cheeks just sweat like that, it’s weird hereditary disease…”

I considered doing take out for dinner, but I am still trying not to eat out in September so I racked my brain for something super easy and fast to make at home. Then, I remembered a little trick Ben taught me – “Add eggs to everything”.

I know it sounds beneath your own culinary prowess, but stay with me here. Anytime Ben has leftovers that he’s either A.) sick of eating or B.) wants to bulk up – He throws it in a skillet and adds eggs. Tonight I did the same thing. 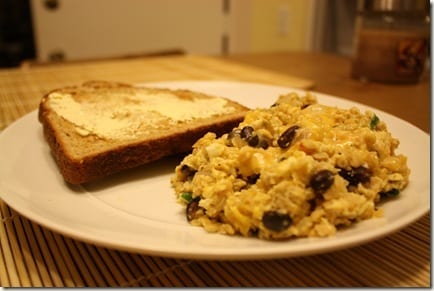 I sautéed some onions until translucent then added the leftover rice and beans. When it was hot I added about 4 eggs whisked with milk and cooked through. Finally, I topped it with cheese and called it… 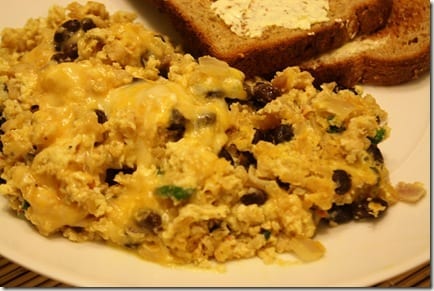 Served with green beans. You better believe ridiculous amounts of ketchup and hot sauce were added after the picture 🙂 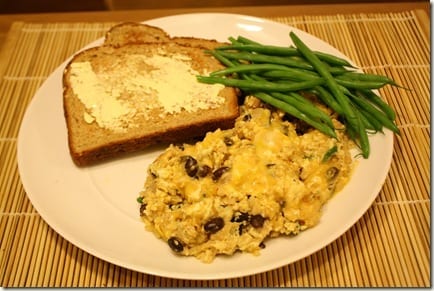 I was still super flustered from my breakdown and right after dinner eat a bunch of TJ’s dark chocolate disks before I realized it was stress. I’m not mad at me though 🙂 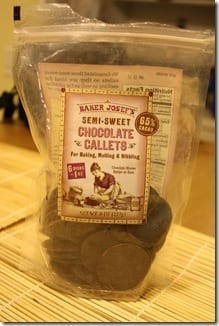 My afternoon snack was eaten between class and lab – Pop chips and carrots. I ended up not having time for the cheese, but regret that now because it probably would have helped my blood sugar. 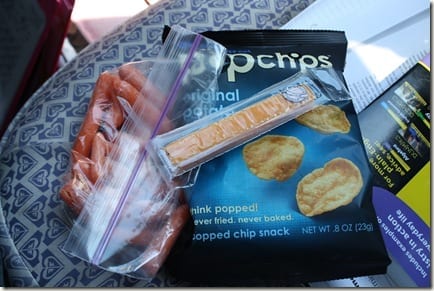 Now that I’m on the West Coast I feel like my dinner post is super late for all ya East Coasters. I can’t really change that, but I’m sorry if I seem delayed.

In case you’re curious where other people eat lunch – take the poll at the end of my post and it’ll tell ya where everyone else is eating. (Hint: it’s probably where you are right now.)

And because most restaurants have Mexicans in the kitchen, and this blog is no different – you should vote for this Mexican for the Project Food Blog contest.

Disclaimer: Please speak with a medical professional before making any changes to your diet or exercise. I am not a doctor or registered dietitian. The views expressed are based on my own experiences, and should not be taken as medical, nutrition or training advice. Please note that affiliate links and sponsored posts may pop up from time to time. I truly appreciate your support. END_OF_DOCUMENT_TOKEN_TO_BE_REPLACED