I randomly found a baggie full of blubes in my bag today. For a second I was worried that they were too smooshed to eat. Oh no! It was a close call, but they were okay and I ate them. 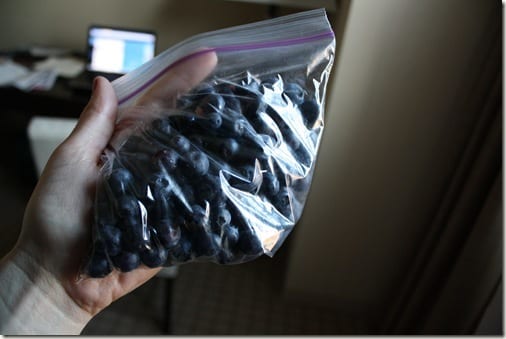 I also ate the last of the cherries we picked up last night on the way to Arizona. I asked Ben how many cherries he thought was in a serving. He said, “20?”. It’s 21! That was a close call Ben 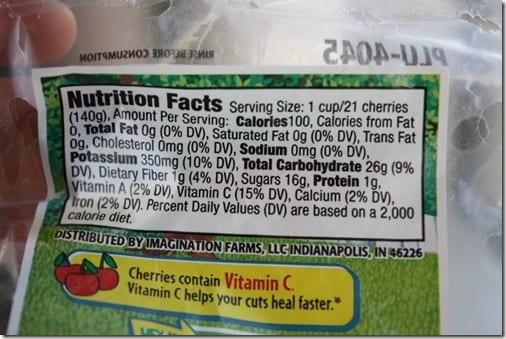 After lunch we wanted to do something low key and decided to see a movie. The only thing playing in our time frame was either MegaMind or Little Fockers. That was not a close call – we saw the Fockers. 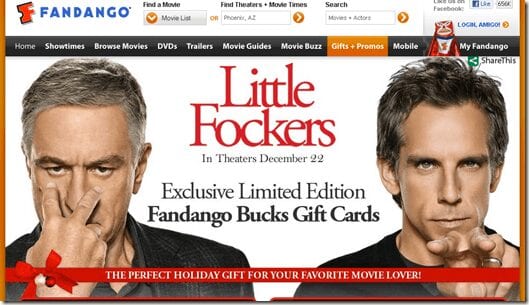 Most of the time I get bored of movies and want them to be over. That didn’t happen with this one, so that’s a good thing. If I’m not tapping my foot for a movie to be over then it’s a good review.

Now for the reason I run = the sense of athletic accomplishment CARB LOADING!

I swear by my tried and true carb loading method = Thai food (or Chinese) with tons of rice and soy sauce. Tonight was no different. Luckily we found a good Thai place to meet these needs. 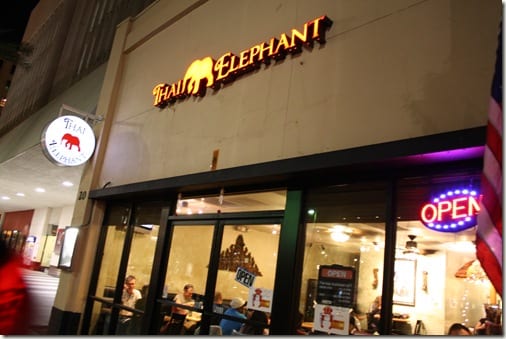 Most of Downtown Phoenix was dead tonight, but this place was bustling. I take that as a good sign!

I ordered the Spicy Eggplant with Tofu. The weird thing is, there was barely any eggplant in this dish! 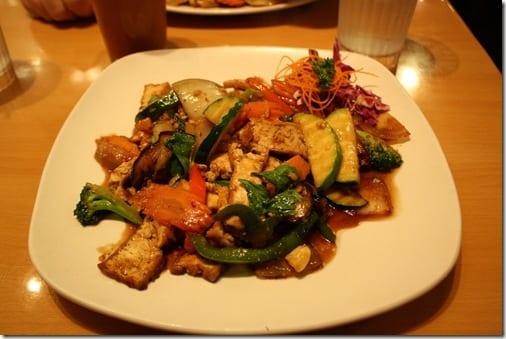 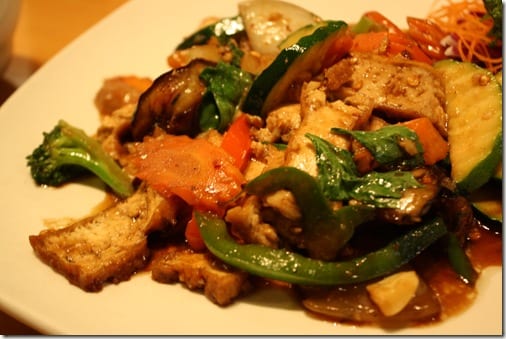 Despite that, it was still delicious! Loved it. 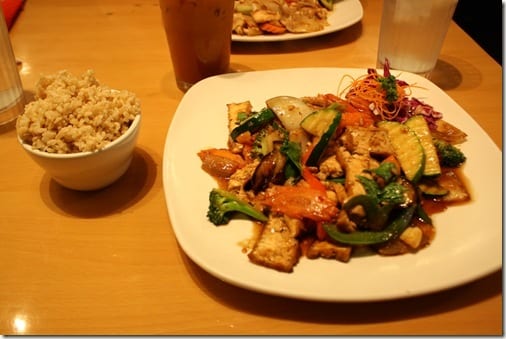 Ben and I shared my dish and his Drunken Noodles. Both of these were super tasty, well seasoned and the right amount of spice. 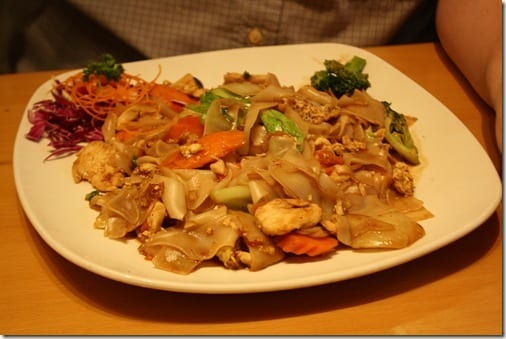 I come for the carbs! Gimme gimme. 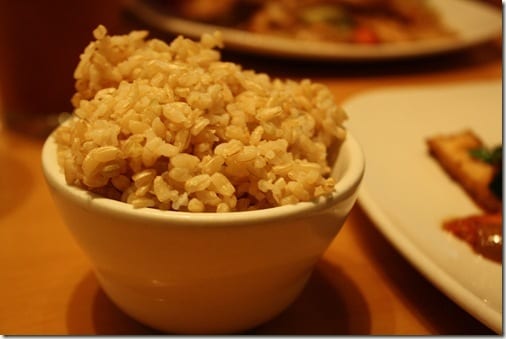 I know you’re not going to believe me, but Ben was totally pushing dessert tonight. I don’t know what has gotten into this guy, but he has a major sweet tooth lately. I am never going to turn down chocolate cake, but I let him dominate this because I didn’t want to have stomach issues tomorrow. 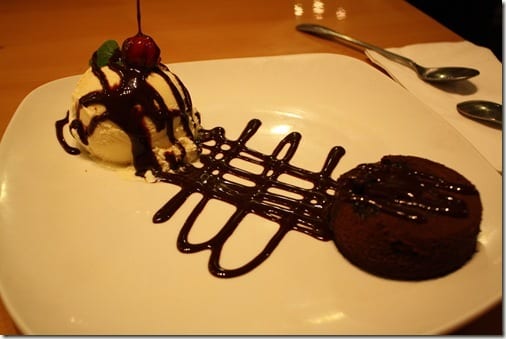 Now that my belly is full it’s time to get ready for the race! AHHH! Every time I sign up for a race it seems like a good idea, then 2 or 3 months later I’m like, “What did I get myself into?!?!”

I suggest setting out all your clothes the night before your race, pinning your bib on your shirt and putting on your shoe tag. When I went to do this I realized that I was missing safety pins! Oh no!

Thankfully we called the front desk and they sent up four safety pins. God Bless them. I almost had a heart attack. Crisis averted. 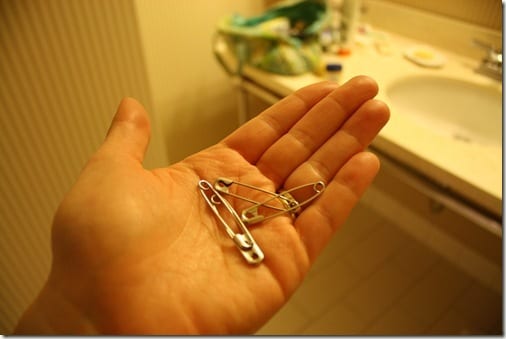 But then I ran into another slight crisis when I realized I didn’t bring any make-up remover. I wear waterproof mascara so that stuff is not coming off without a fight. The second crisis was averted when I found Vaseline in my bag. I just had to slather it on and leave it for a few minutes before trying to wash it away (which is not easy). 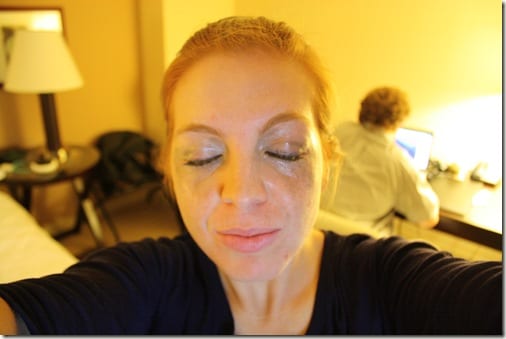 In the meantime I looked like a raccoon. If I knew what sound a raccoon made I would be making it right now.  (Insert raccoon noises here) 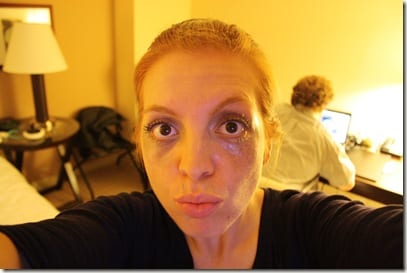 Previous Post: « Get Me To The Greek Food
Next Post: Rock N’ Roll Phoenix Half Marathon Recap »

Disclaimer: Please speak with a medical professional before making any changes to your diet or exercise. I am not a doctor or registered dietitian. The views expressed are based on my own experiences, and should not be taken as medical, nutrition or training advice. Please note that affiliate links and sponsored posts may pop up from time to time. I truly appreciate your support. END_OF_DOCUMENT_TOKEN_TO_BE_REPLACED