I feel like such a complainer about the cold weather in MD, but getting back here today I realized it’s just not for me. And that’s okay. The reality is I am not happy with my current situation and I am working on changing it. But, I can’t change it over night (there’s the whole new job, new home thing) so until then, I will stop complaining and make the best of it! I can say at least say it’s been a very wild ride here 🙂

This was the scene when we got to my car are the airport… It’s crazy!!!

I found the best oatmeal at the Detroit airport. It was from Coffeee Bean and Tea Leaf. I actually watched as the barista put instant steel cut oats in a pan and cooked them up. Then, fil the cup with blueberries on the bottom, the oats, blueberries on top, banana and granola. I was very impressed.

And it was soooo good. If they offered this at a local Coffee Bean I would definitely take advantage. 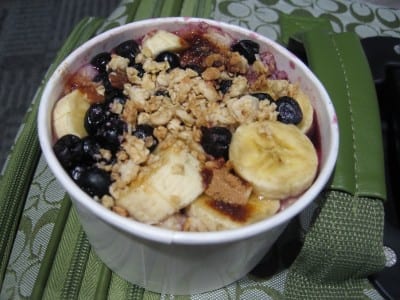 I also got an iced americano – this day is going to require a lot of caffeine if I’m going to survive! Look at how big that oatmeal cup is – filled to the brim, just like I like it 🙂 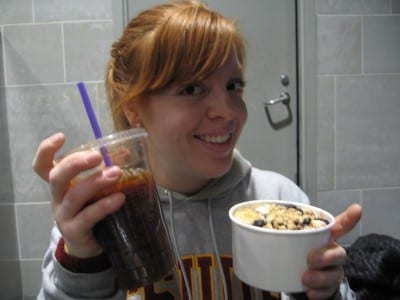 In stark contrast to my very healthy breakfast I had half a piece of Costco pizza for lunch and piece of cinnamon raisin toast. That is what happens when you’re shopping for groceries after only 2 and a half hours of sleep. I’m a mess.

And I’m not just a mess, I’m a crazy mess because since I was traveling with my foam roller and all…I decided to use it during our lay over.

Let me explain. Since our flight from Orange County to Detroit was pretty bare, I got a row to myself and laid out to sleep. I think I was in a weird position and it tweaked my knee worse than it already was 🙁 So, I wanted to stretch it out and at 4:45am, the airport was a dead zone. No one saw me, but Ben thought it was very weird. Okay, it is weird, but I never said I wasn’t. 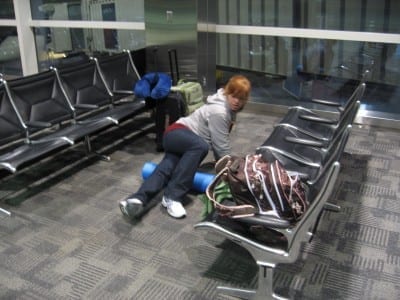 Now I need to thaw out my toes – the several trips to and from my car to bring in my bags and groceries meant drenched feet since the side walks here are still pretty much covered in snow.

I am really dragging since I didn’t really get much sleep last night and now am staring at unpacked luggage and a huge grocery haul that needs to be put away. I apologize, but if you’ve emailed me in the last day or so, I will get back to you tomorrow!


If you've never stopped for a Slurpee mid-run... y

If you've never stopped for a Slurpee mid-run... y

Disclaimer: Please speak with a medical professional before making any changes to your diet or exercise. I am not a doctor or registered dietitian. The views expressed are based on my own experiences, and should not be taken as medical, nutrition or training advice. Please note that affiliate links and sponsored posts may pop up from time to time. I truly appreciate your support. END_OF_DOCUMENT_TOKEN_TO_BE_REPLACED