I found this yogurt at the store on Friday – Breyer’s Mint Chocolate Chip, and had to try it. I love mint & chip ice cream and hoped this would be as tasty. I knew it would be a reach, but I thought I’d take a shot.

It was okay. It tastes a little artificial, and it’s not ice cream, but it’s a portion controlled alternative. 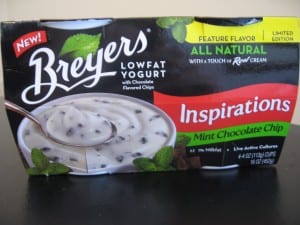 I made it into a shake for dessert tonight and that is how it is best served. I added yogurt, ice milk, chocolate chips and choc syrup in the blender. Topped with granola – amazing! 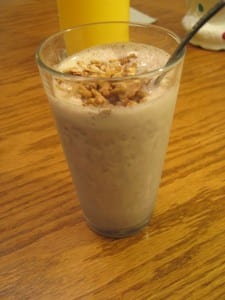 Dinner was good too – mac n’ cheese. I just made a box of Annie’s mac and added artichoke hearts and cottage cheese. I love having Ben around because I have to share. If it wasn’t for him I’d have eaten the whole thing! 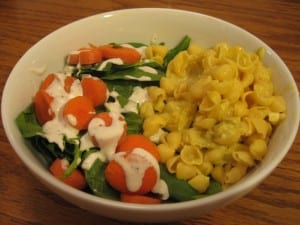 Intuitive Eating – Tonight after dinner I had the shake and a few cookies. I wasn’t hungry, but really wanted something sweet. Outside of  today, I’ve been doing really well with I.E. I am finally, albeit slowly, learning to read my hunger signals. This is a lot harder than just printing out a meal plan from some random diet and following that. Our bodies are complicated (especially when years of dieting and overeating has mess you up!).

I am so determined to be an Intuitive Eating weight loss success story!

Since watching Twilight the other day I keep talking about it. Ben thinks this means I like vampire movies and is making me watch Underworld as I type. Great. I don’t like dark or scary movies. I’m going to have to pretend to be blogging for the next hour so I don’t have to pay attention to it.

Disclaimer: Please speak with a medical professional before making any changes to your diet or exercise. I am not a doctor or registered dietitian. The views expressed are based on my own experiences, and should not be taken as medical, nutrition or training advice. Please note that affiliate links and sponsored posts may pop up from time to time. I truly appreciate your support. END_OF_DOCUMENT_TOKEN_TO_BE_REPLACED