My prerace meal of choice is some kind of Chinese food with lots of rice and soy sauce! So tonight I made a tofu stir-fry with brown rice. I love eating rice before long runs and races since I love it so much. I finally get to eat as much as I want and not feel guilty!

I am getting really good at making Chinese style tofu! I made a sauce of chili garlic sauce, maple syrup, PB, soy sauce, red chili flakes and love. Amazing. 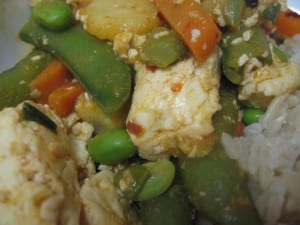 *Note: You should always try out pre-run dinners and breakfasts a few times (preferably  many) before a race. Don’t try anything new before a race. Figure out what works for your body. This works for me, but may not work for you. I don’t want to cause anyone stomach issues during a race so try it out before hand. That being said – I still swear by lots of rice and lots of soy sauce!

But, I actually started my carb-loading earlier in the day. I ate an entire bag of popcorn as an afternoon snack. I was craving something salty like chips today and ended up grabbing this as I walked out of the house this morning. 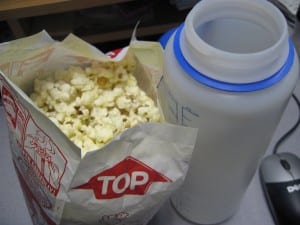 My afternoon snacks also included 1/2 a Larabar and 3/4 this ice cream bar (I was super full after all that popcorn, but wanted something sweet). 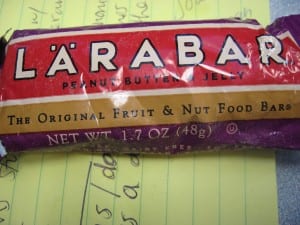 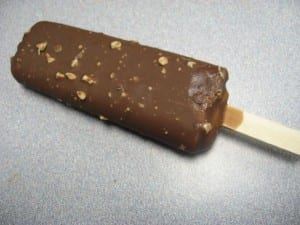 Lunch was a pita stuffed with broccoli and falafel, carrots and grapes. 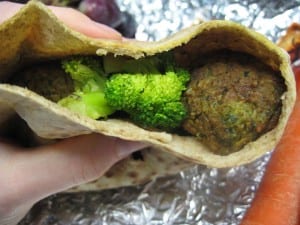 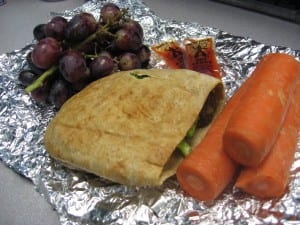 I am glad I grabbed those packets of Texas Pete’s at Chick-fil-A last night! I had never tried it before and Loved it!!! 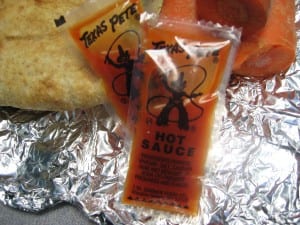 I also ate a kiwi at some point this morning, but that’s as exciting as stolen condiments. 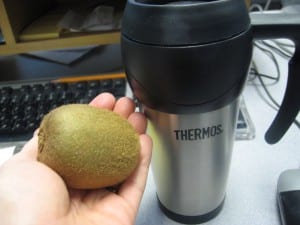 Now I am going to relax on the couch for a bit before hitting the sack (that damn sack, I wouldn’t hit it so much if it didn’t talk back).

Actually, we need to get up super early since the half marathon is almost 2 hours away! I’m worried that the race doesn’t start until 9:05am and I am used to running within 30 minutes of waking up. For a long run I usually wake up, bathroom,  change into running clothes, drink water/sports beverage, eat toast with PB, RUN!

But, tomorrow I’m going to have to eat in the car on the way to the race. I don’t want to get hungry again 2 hours later (as the race starts!), but I don’t want to be full either. I hope I can stick to my usual pre-race eats and it will keep me full for over 4 hours (driving plus running). May bring an extra snack…

Happy Weekend everyone! After the race I think we’re meeting friends for Oktoberfest!

Also, Ben said he would rub my legs tonight, but I have to PR tomorrow. Ummmm…for some reason I’ve gotten slower since moving to MD (maybe because CA is better)? So, I am not sure if that’s going to happen. I’m going to try my little Mexican hardest though!

This error message is only visible to WordPress admins

Error: API requests are being delayed for this account. New posts will not be retrieved.

Error: API requests are being delayed for this account. New posts will not be retrieved.

Disclaimer: I am not a doctor or registered dietitian. The views I express are mine alone, based on my own experiences, and should not be taken as medical advice. I am a certified running coach, but am sharing my own training – not providing a program for you. Please speak with a medical professional before making any changes to your diet or exercise. Affiliates: Please note that affiliate links and sponsored posts may pop up on RER from time to time. I greatly appreciate your support!  END_OF_DOCUMENT_TOKEN_TO_BE_REPLACED