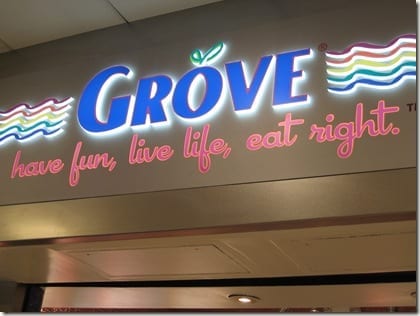 As I was walking around the Atlanta airport during my layover I saw this sign and wanted to take a picture of it. So, I went to get my camera and that’s when I realized –

It had already been at least a half an hour since got there and was wandering around. But, I somehow managed to find the gate where my flight arrived and a flight attendant let me go back on the plane to check if it was still there. And it was!

I had a small heart attack, but nothing a weekend in Vegas can’t solve 😉

I brought yogurt and cereal for breakfast on the first flight, but decided to get steel cut oats from Pot Belly instead. I ate it with my banged up banana. 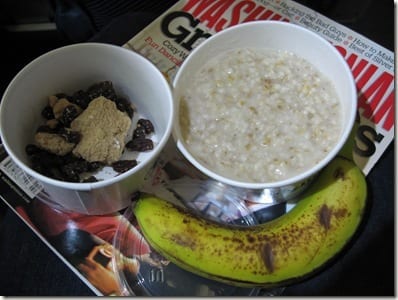 My seat neighbor thought it was weird I was taking a picture of my food and I told her about the blog (Hi Joanne!). It turns out she and her husband are trying to be healthier this year and we had a lot to chat about! The flight was over before we knew it.

I walked around the Atlanta airport for about 40 minutes before stopping to dig into lunch. I am exhausted already and really need to take a nap on my next flight.

I grabbed a DD iced coffee to go with  my packed lunch: 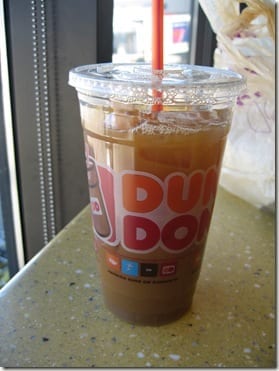 I really should be more embarrassed about this because I really am the grossest traveler. I packed the leftover brussel sprouts from last night as part of my lunch and you could smell them when I opened up my backpack on the place.

To my credit, I did actually eat them in the food court – not in a confined space.

With my brussels, I had PB&J, yogurt and trail mix with cereal, raisins and cashews. 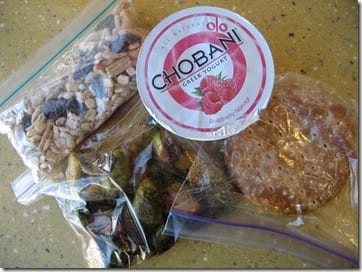 I’ve decided to allow non-sugar cereals at least until I get back home because it’s a healthy breakfast or snack choice on the go.

**Added bonus: My mom credits Kashi Go Lean with one of the main reasons she lost weight after she had Matt. She used to eat if for breakfast and also as a snack in a homemade trail mix. For some reason we both have gotten away from eating it and are talking about going back.**

Boo! I just realized I forgot my peeled orange in the fridge at home. Ben, go at it.

Now I have a little bit more time to hang out before I’m off to Vegas! I need a nap.

Disclaimer: I am not a doctor or registered dietitian. The views I express are mine alone, based on my own experiences, and should not be taken as medical advice. I am a certified running coach, but am sharing my own training – not providing a program for you. Please speak with a medical professional before making any changes to your diet or exercise. Affiliates: Please note that affiliate links and sponsored posts may pop up on RER from time to time. I greatly appreciate your support!  END_OF_DOCUMENT_TOKEN_TO_BE_REPLACED