I’m still alive, but not feeling great. Let me start at the beginning though…

The day before the race we drove from the Sarasota area to Orlando for the expo. Ben’s brother Jon was our driver 🙂 We were all shocked at how cold it was! Jon didn’t even pack pants! 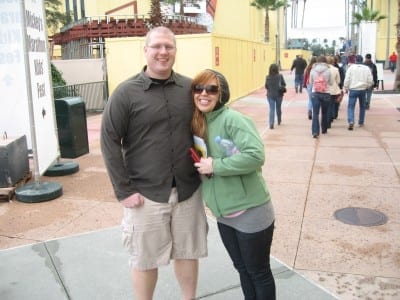 The expo wasn’t amazing considering the size of the race. 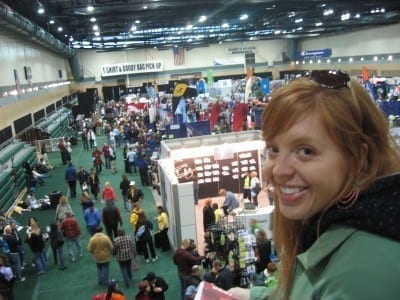 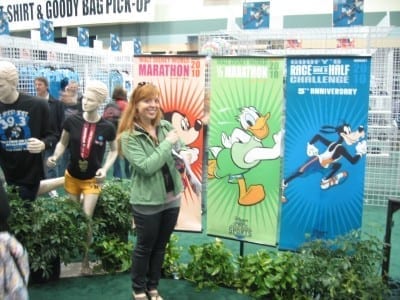 Then, we went to the hotel where I met up with Meghann (who was also running) and Melissa (spectating). We went to dinner for some carb-loading at a little Italian place. 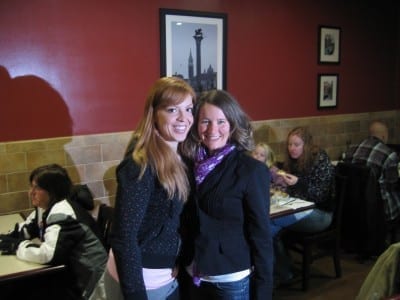 I started with a boring salad. 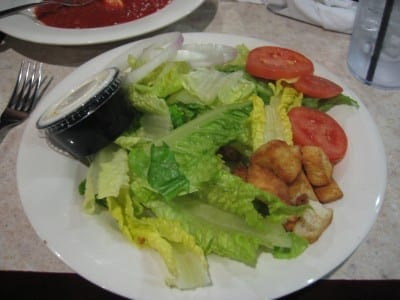 I ordered my own small pizza with broccoli, tomatoes and onions – they were a little cheap with the toppings. I thought it was just nerves, but my stomach was hurting so I only ate three pieces of my pizza. 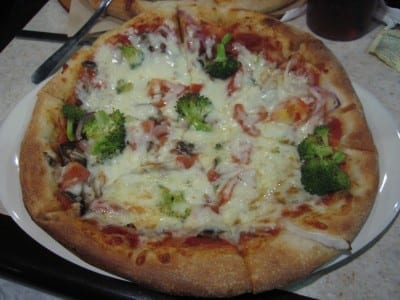 When we got back to the room Ben and Jon went to the movies and I set out all my gear for the next morning. While packing everything I ate two cookies for extra carbs, but my stomach was still bothering me.

When I finally got in bed I could not sleep. I laid awake for hours until I got up to go to the restroom and realized my throat was killing me. I called Ben and told him to bring back throat spray and Dayquil. This was not the way I wanted this night to go.

When I asked Ben what should I do he said, “Just try to come out of this alive.” Thanks Ben, thanks. 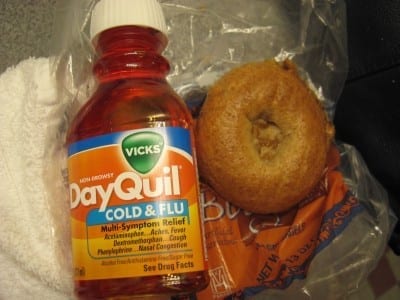 I finally got to sleep around 1am – just in time for 2 hours of sleep before my 3am wake up call! I hydrated, ate and took the Dayquil. I was super nervous about this because I kept second guessing myself – maybe I was just really nervous, maybe I wasn’t sick…but I didn’t want to take the chance by not taking medication and feeling super sick during the race.

I took the throat spray with me to use up to the start of the race too. 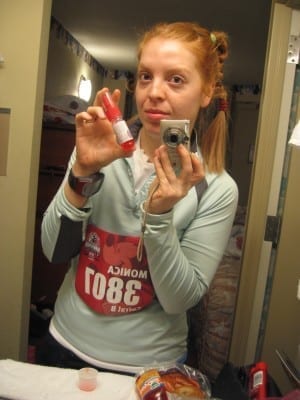 It was so freezing in Orlando I brought a hotel towel to cover my head and try to keep some heat in me. It didn’t work that well, but it was better than nothing. 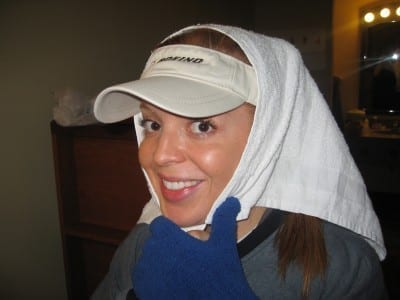 I don’t have any pics of the race because Ben wasn’t able to catch me on the course. He was getting text updates (from Disney) of my location, but he had expected me to be going a bit slower and was one step behind me every point he stopped at. This is how I know I started out way too fast and screwed myself. 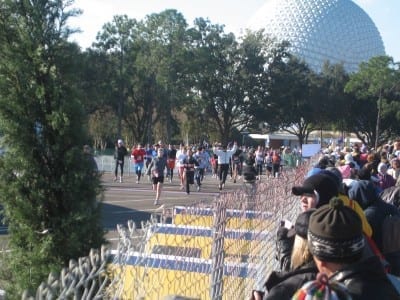 Remember my disposable running gear? Well I ended up cutting the sweatshirt up the front and the sweatpants down the sides. But – I wish I wouldn’t have! I was so cold and wanted to keep them on, but the pants were flying all over the place so I ditched them at the start! I kept the sweatshirt on the entire race and just let it flap in the wind. I kept trying to tie it closed, but my hands were so frozen I couldn’t feel my fingers enough to do it right! 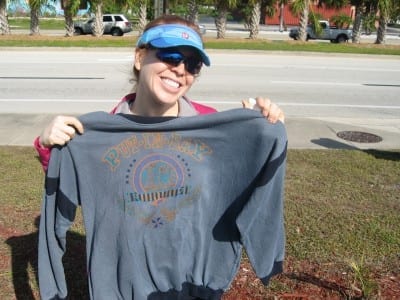 I was really good about eating enough this race, but I was afraid to drink too much since I wasn’t sweating much liquid out. I didn’t want to over-hydrate myself which can be very dangerous (hyponatremia). So even though I was thirsty I was limiting my liquids. After the race I realized this was not necessary because my pee was darker than normal (I know you wanted to know that).

Around mile 8 I started thinking about the restroom. I didn’t have to go, but I felt like I had a bubble in my stomach (gas?). I am super afraid of the dreaded “runner’s trots”. So I stopped a porta-potty to make sure I didn’t go in my pants. I was quick so it didn’t add too much time to the clock.

I did not look at my Garmin once until mile 19. It was under my clothes and I knew I wasn’t going to break any records, so I thought “No news is good news.” But, I should have realized I was pacing too fast.

At mile 18 I hit the wall hard. The plan was for Ben and Jon to see me at mile 19 and he had my sunglasses and Vaseline in case I needed it. I told myself I would just drop out of the race and go home with him. Yes, I really decided that in the middle of the marathon.

I felt sick and tired and hopeless. I wanted to quit.

Luckily, Ben didn’t catch me at mile 19 so I had to keep going. From that point on I was run-walking the rest of the race.

When I saw that at mile 20 I was behind to beat my PR I kinda gave up on trying to get a good time. Boo.

Ben caught me right out of the chute and I feel like someone kicked my ass. For some reason my whole body felt jacked-up. 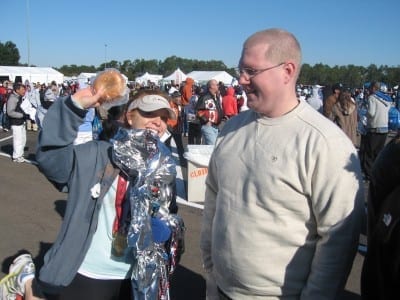 Ben and I after the race: 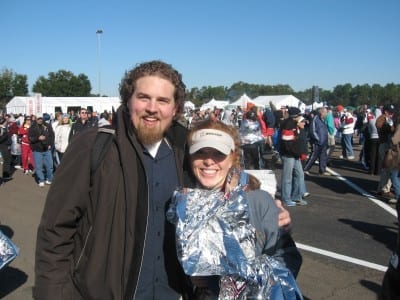 When we got back to the hotel room I ate my leftover pizza, a muffin and a few cookies. I was actually a little hungry, which doesn’t normally happen after a long run. 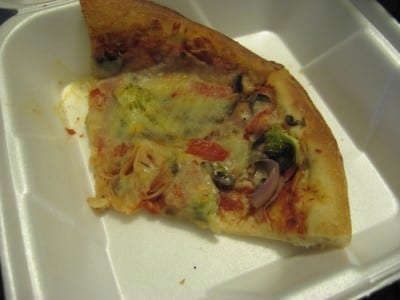 Then, I showered, laid down and let the sickness take over. I had been trying to fight it for a few days, but knew I was getting sick. Finally I could just be sick.

I couldn’t take any ibuprofen (my usual drug of choice) because it’s dangerous to take before or immediately after a long run. And for some reason I forgot about the Dayquil (which has acetaminophen and is safe to take).

We had a few hours to kill before we had to catch our flight so we went to the movies. 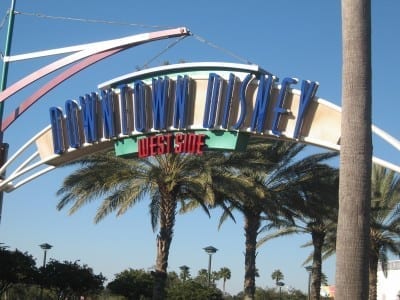 I ate randomly for the rest of the day. I wasn’t hungry, but my body felt depleted so I made myself eat. I also tried to get a picture of how blood-shot my eyes were, but it didn’t come out. 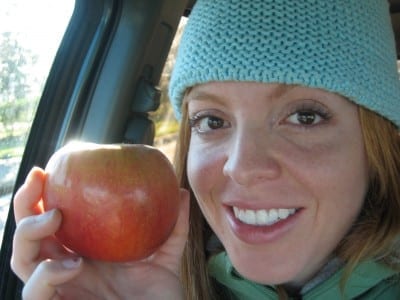 My thoughts about the race: I am definitely disappointed with how I did and my time. I know I can do better than that. I realized going into this race that my head wasn’t in the game. You have to be mentally prepared for a marathon and I wasn’t.

I really tried to “pscyhe” myself up for this, but for some reason I just couldn’t dig deep enough. I wish I would have just slowed my running instead of walking toward the end. But, I have learned a lot from this race.

My biggest regret is now I have to do another marathon to redeem myself. Damn. Okay, one more – and then I’m sticking to the halfs. For real B.

Previous Post: « The miracle is that I had the courage to start
Next Post: Mexican Meatless Monday – Part II »

Disclaimer: Please speak with a medical professional before making any changes to your diet or exercise. I am not a doctor or registered dietitian. The views expressed are based on my own experiences, and should not be taken as medical, nutrition or training advice. Please note that affiliate links and sponsored posts may pop up from time to time. I truly appreciate your support. END_OF_DOCUMENT_TOKEN_TO_BE_REPLACED