First, let’s take a short run down memory lane if we’re just meeting. The fact that I haven’t run a race in so long is wild. Before that I was probably running a half marathon every month and at least a handful of full marathons every year. Then, a few things happened in my lil world as well as in our big world that changed my fun racing streak. 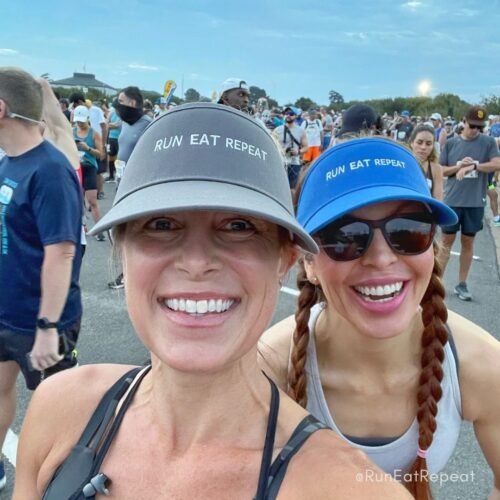 I would’ve never imagined not running a race for this long. But, I guess there are a lot of things we couldn’t have imagined way back in the Fall of 2019!

A few months before the pandemic started I BROKE MY FOOT. And I was DEVASTATED that I wouldn’t be able to run for up to 8 weeks. I was registered for several half marathons and full marathons – it was October and Fall is prime race season around here!

Earlier that year I had to take some time off when I had my egg frozen (aka fertility preservation – there’s gotta be a better way to phrase it). I had the procedure done knowing I’d have time to train for a great fall marathon. I was excited to run hard, get faster, have fun, travel to races and do hard things!

When I broke my foot I was sad, but accepted that I had to take about 8 weeks off from running. During that time off I did all the things to help heal my foot so I could run a Spring marathon. 8 weeks seemed like forever!

Then, someone named Pandy showed up to the party and cancelled everything. I live in Southern California so while other states have been racing like ‘Pandy, who? I don’t know what you’re talking about?!’… There have not been in person running events around here up until the last few weeks.

And that’s how we find ourselves here – my first race in almost 2 years. 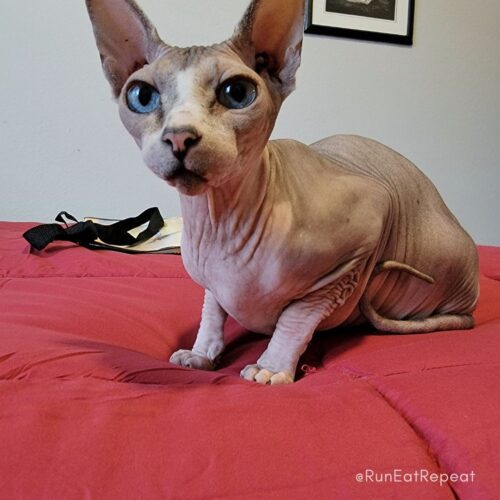 My point to the dramatic monoblog above is = I haven’t run a race in a long time.

And because the last year has put things into a different perspective – I mostly want to get back into shape right now (read as: I gained weight in 2020) and have fun running races with friends (read as: I didn’t socialize outside my bubble and it’s made me weirder).

So when Kristin @StuftMama asked if I wanted to run the America’s Finest City Half Marathon with her – I jumped at the chance. It was kind of last minute and she hasn’t been running much. But it was important that my first race back after so much time genuinely be FUN.

I just signed up to Run the Dopey Challenge – even though I haven’t run a race in sooooo long!?! If I hated running 1 half marathon I was in serious trouble.

Thus, the goal of the day was to finish the race, have fun with my friend and not cry.

And… spoiler alert –  I can happily report back that I crushed that goal. Boom.

AFC Half Marathon the Night before the Race

Kristin lives near San Diego so I stayed at her place the night before the race. I forgot to take a pic of my flat runner, but didn’t forget anything. Actually, as I was getting my stuff ready for the race – it didn’t feel like it had been that long. That made me feel good!

Kristin is the best host and always have the best food. We made diy pizzas to eat the night before the race and she had more toppings that Pieology. 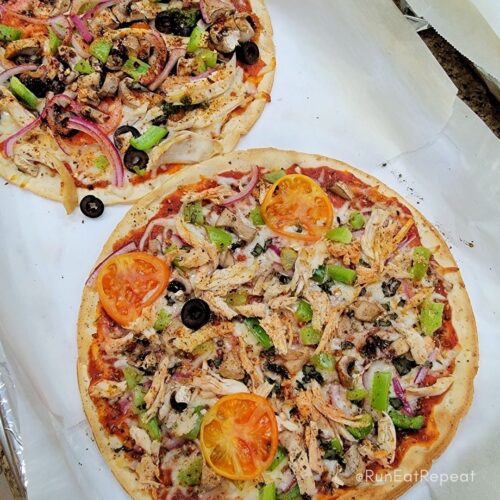 She also had the guest room all set up for my stay complete with several pets there to greet me. (That’s where the hairless cat pic came from.)

The race is a point to point course and you have to take a shuttle to the starting line. This meant an even earlier than usual wake up call as the last shuttle to the start line leaves at 5:15am. So, we set our alarms for 4:00am and tried not to think about how little sleep we were going to get.

Since we had a shuttle ride before getting to the start line we brought what we were going to eat before the race, coffee and water to have on the bus. Kristin has done this race several times before so she knew the drill and filled me in on all the things.

The buses are usually packed but there was only ONE other runner on our bus! This is NOT the usual situation and might be due to the race organizers limiting the number of runners OR people just not running races yet after so much time off??

We had to wear masks on the shuttle but they were not required on the course. I saw a couple of people wearing masks at the start line, but there were not a lot. 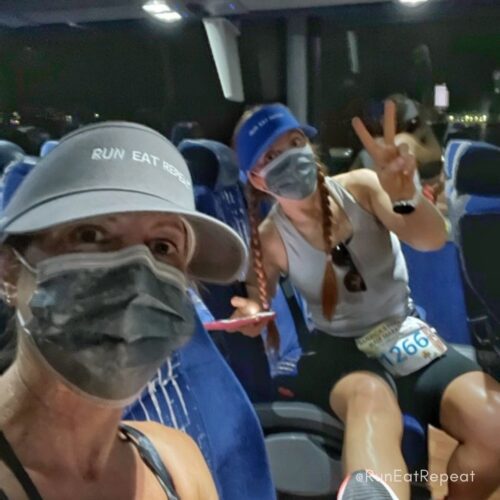 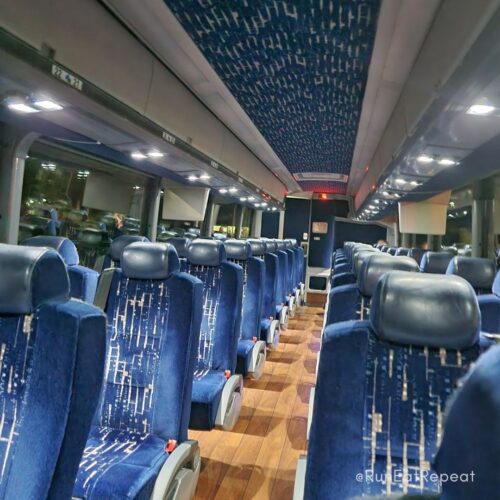 We got off the shuttle and went straight to the porta potty line. Ahhhhh…. porta potties, I associate these with running races so just seeing one makes me a lil nervous. Is that weird? 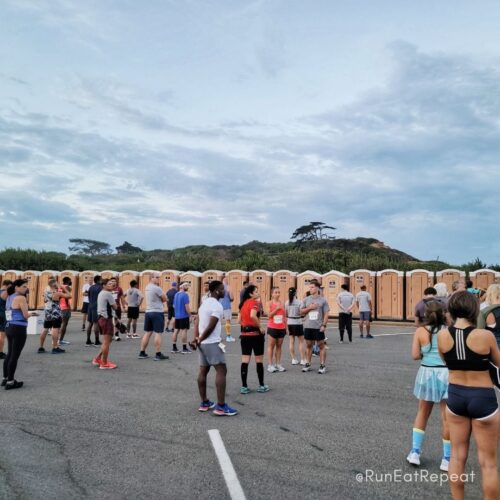 Time to head to the Start Line!

Kristin took this pic of me and a guy dressed as a… warrior? 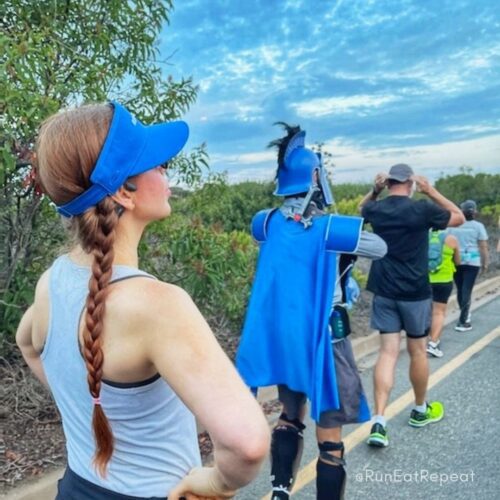 Before the race Kristin told me the course is pretty flat except one hill at the end. I also checked the race website to see the course elevation. They lied.

Pro Tip: The course elevation maps are often misleading because they condense 13.1 miles or 26.2 miles into a 2 inch image.

Life Tip: Your friend may stretch the truth about course elevation because they want you to run with them.

There’s NOT a hill in the last mile of the race.

The last MILES of the race ARE UPHILL.

Basically from Mile 11 to the finish line was up hill and did not feel like it evened out until maybe the last quarter mile.

But, it’s called ‘America’s Finest City’ for a reason – San Diego is beautiful and fun. So, I’m not mad about it. 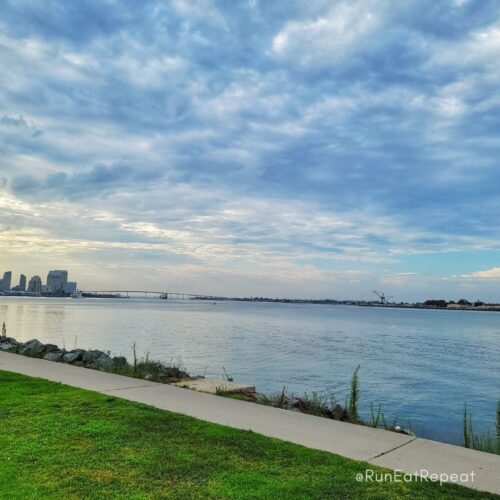 The race starts at a Veteran’s Memorial Park and it’s very beautiful and peaceful. Then, you run through a residential area before running along the water. The grand finale is the aforementioned HILLS as you run through city streets all uphill to the finish line. 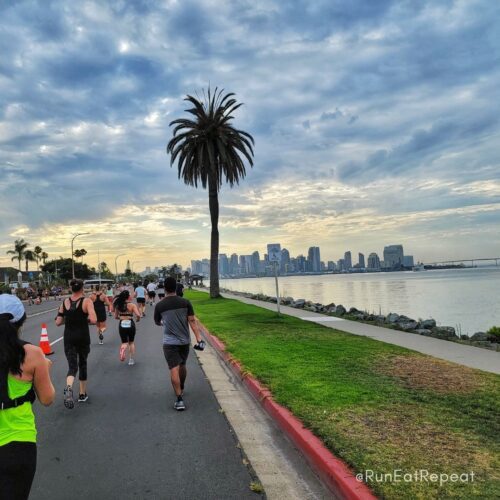 I walked A LOT of the last 2 miles because I felt my heart rate going way too high. And I think I was walking it faster than I was going to run it at that point!

I was a little disappointed in my current fitness level that I had to walk so much. But, I’m really glad I know where I am right now in terms of running fitness.

And more than anything I needed to get that first race done so I could feel a lil less anxious about my upcoming races! During the pandemic I haven’t run as much, gained weight and started to get night terrors – and I was stressed about all of that.

I was very happy to cross the finish line and see a couple handing out chocolate milk. The man works for Hollandia Dairy, a family owned farm. I talked to him about it for a few minutes and could’ve kept chatting forever but he was kinda busy as more runners came through. ( I spy the Real California Milk logo on the truck.) 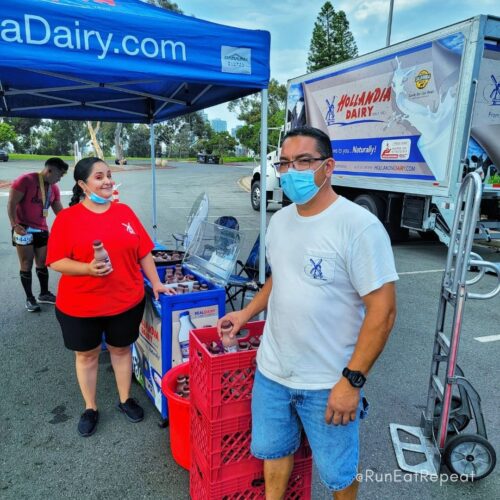 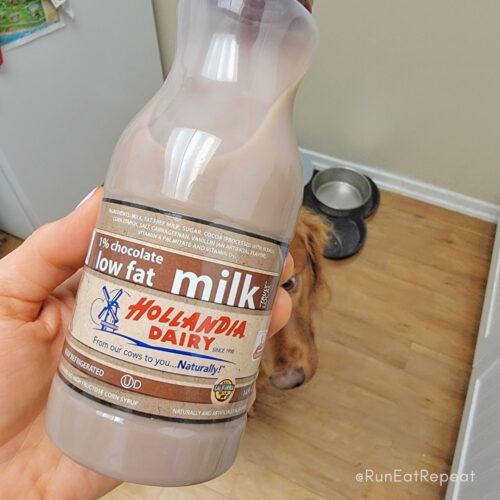 Kristin and I ran together until about Mile 7. Since she hadn’t been running much lately we agreed before the race that I could take off any time I wanted.

Note: This is key when running a race with someone – make sure you talk about this BEFORE the race. Know what your goal is and what your running buddy’s goal is for that race and their strategy.

Running with a buddy for the first time? Think about… 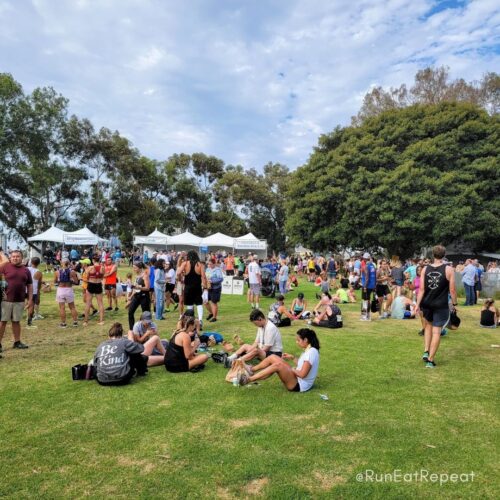 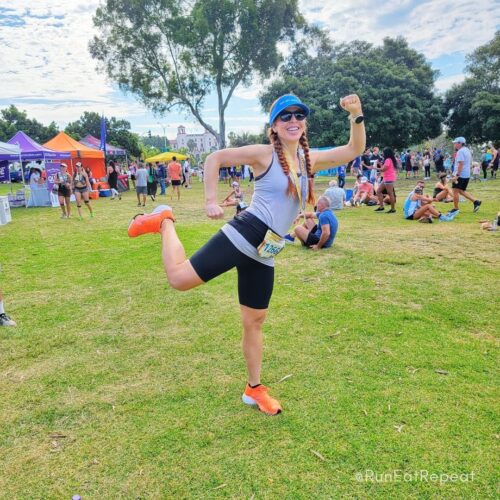 After the race we headed back to Kristin’s to eat, drink and relax. After our 4am wake-up + running 13.1 miles I was starting to wilt so I had one of her caffeinated sparkling waters. Behind that is a corn thin with Laughing Cow cheese and turkey. 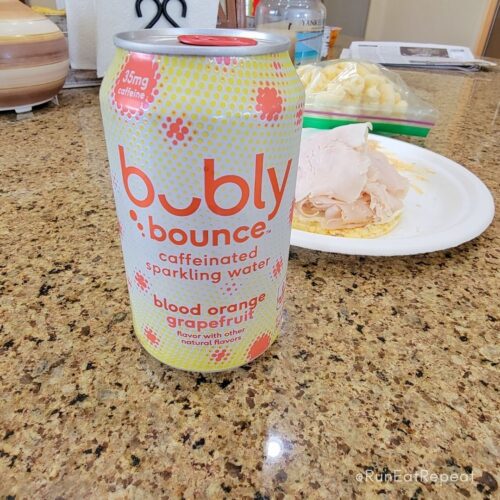 Kristin’s family sells Buffalo Jerky and Ostrich Jerky and she gave me some of each. You can contact her via her blog – StuftMama.com or Instagram @StuftMama if you want to buy some! 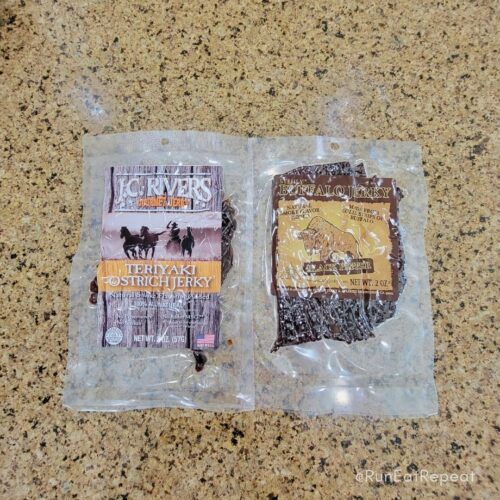 Overall thoughts on this half marathon

Reminder, this is my lil running blog that I started years ago to document my weight loss and first marathon training journey. In the beginning I was a lot more overweight, I ran a lot slower and I’ve come a long way from that. I have perspective. But, I’m a tough love kinda running coach – to myself more than anyone else. And these are my honest thoughts on my own running log (that you happen to be reading because I post it online).

I’m a lot slower than I want to be, slower than I should be right now. I’m not happy with my finish time. I can do better than this. These results weren’t due to a hot day or bad day. It’s reflective of my current fitness level and weight gain. I NEED TO PUT IN THE WORK.

I wish I would’ve started training earlier, but I registered for a half in June and it was cancelled. Every race I’ve considered doing in the last year has been cancelled or switched to virtual.  I really wasn’t sure up until the day before this race if it was even going to happen! California keeps taking steps forward and backward in getting back to a post-Covid world.

This race actually being an in person event makes me feel very hopeful though! And it was the reality check I needed to get it together.

Also, my foot injury scared me and the lingering aches had me take a lot of additional time off last summer. I posted about it on Instagram (@RunEatRepeat) and a few of you chimed in that after breaking a bone you felt random pains on and off too.

I think it was just my body working some stuff out? But I started to ‘baby’ it aka favor my other side and mess with my running gait – which started to hurt my knee!?!? This is something I’m working on with strength and conditioning workouts.

And I don’t think we talked about this but, I had a bone scan since my doctor thought it was odd how it happened. It didn’t seem like a running injury and it wasn’t caused by impact or an accident that I could point to for sure. Turns out I have bone density loss in multiple areas of my body.

My point is – There are several reasons I’m slower and have gained weight. Some of them were out of my control, but those aren’t the ones I should focus on (or use as excuses). There are several things I can control – and I should work on those as best I can.

So that’s where we are today…  Onward and upward! (<– What podcast is that from?) 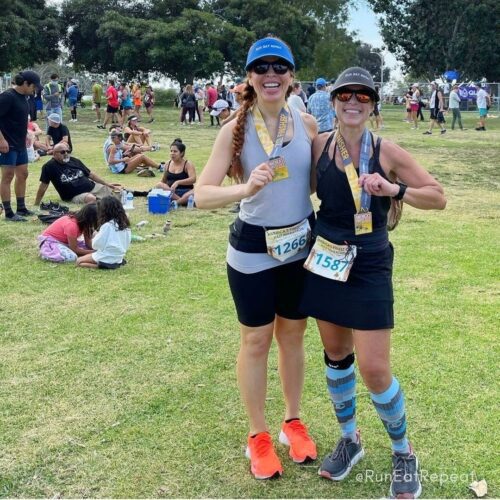 Now I have several races coming up this year AND the Dopey Challenge I just decided to do!!

More on that next!

If you’re in the SoCal area and looking for an in person race – the Surf City Half Marathon is coming up soon (the date was changed for 2021). Save 10% with discount code: MONICA10

Disclaimer: Please speak with a medical professional before making any changes to your diet or exercise. I am not a doctor or registered dietitian. The views expressed are based on my own experiences, and should not be taken as medical, nutrition or training advice. Please note that affiliate links and sponsored posts may pop up from time to time. I truly appreciate your support. END_OF_DOCUMENT_TOKEN_TO_BE_REPLACED