My Golden Retriever, Diego randomly started bleeding from a bump on his back near his tail yesterday. I took him to the vet and now I’m trying to give him his puppy medicine but he won’t take it! 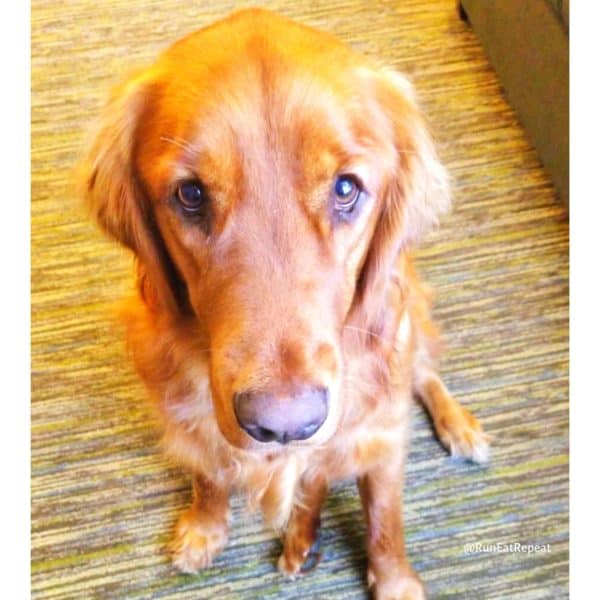 I noticed Diego’s fur looked wet in one spot yesterday morning. It was weird since he hadn’t been around anything that would’ve gotten him wet like that so I checked it out.

Well, it was BLOOD. And he had a big bump!

I had noticed a small bump a while back and so had my friend who puppy-sits Diego. We inspected it because we were afraid it was a tick or something – but it just looked like a bump of skin.

I think this was the cause of his big bump issue, but can’t really be sure.

Recently it seemed like the bump was getting bigger but it wasn’t very noticeable and didn’t seem to bother him. But when it started to bleed I realized it was something that might be serious. He didn’t seem to be in any pain and let us touch the area to clean it and check it out.

Yesterday I took him to the vet and it’s most likely an abscess caused by a minor wound that healed over and got infected OR a thorn, fox tail or something similar that poked into his skin. The vet had to do minor surgery to clean it out properly.

I went to the pet store while I waited for him to get an inflatable cone collar instead of the plastic cone. The plastic cones are really hard for dogs and cats to wear because the diameter is so wide they bump into everything. My place is very small so he already doesn’t have much room to move around. So when you add a big ol’ plastic cone – he’s constantly bumping into walls, chairs, me… and it seems hard to get comfortable to sleep. 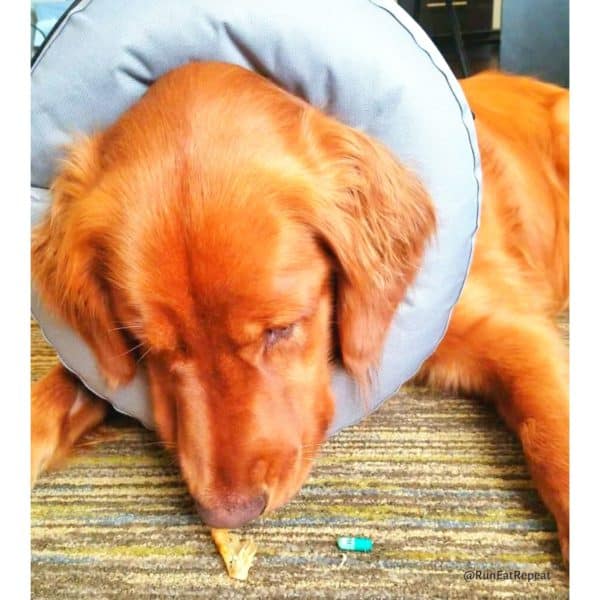 I used a soft safety cone for dogs after he got neutered and it worked well because :

a.) I work from home so he was supervised most of the time and I would’ve noticed if he was trying to lick his wounds

b.) I walked him enough to get his ‘sillies’ out so he was tired and would relax / sleep instead of poke around his wounds

c.) He’s a pretty good dog and listens if I say no – so it wasn’t a constant battle of him trying to sneak away to lick his wounds.

Cone of Shame Alternatives for Dogs

My Dog Walking Must Haves


Now that the big race is over - Can we please get

What was the first running plan you followed??
How

When will you retire from running:

A. When I move

What's your favorite day of the week to run?

Now that the big race is over - Can we please get

What was the first running plan you followed?? How

When will you retire from running: A. When I move

What's your favorite day of the week to run? When

Disclaimer: Please speak with a medical professional before making any changes to your diet or exercise. I am not a doctor or registered dietitian. The views expressed are based on my own experiences, and should not be taken as medical, nutrition or training advice. Please note that affiliate links and sponsored posts may pop up from time to time. I truly appreciate your support. END_OF_DOCUMENT_TOKEN_TO_BE_REPLACED