Hello! This weekend I ran the Lexus Lace-Up Half Marathon in Irvine. I’m excited to share some of the highlights and fun! And I had a wardrobe malfunction that’s never happened before!!
The Lace Up  Irvine Half Marathon is part of the Lexus Lace Up Race Series – there are four races / locations with different distances at each.  Next up the race is in Ventura and there are multiple distances at each location. Check it out and use the discount code MONICA10 to save! 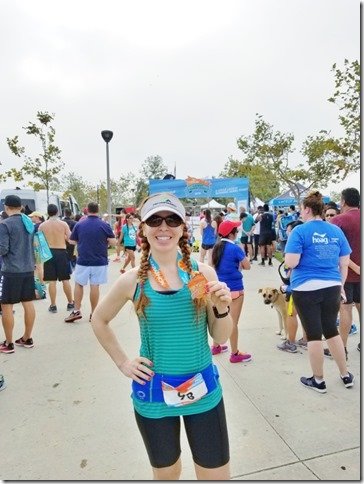 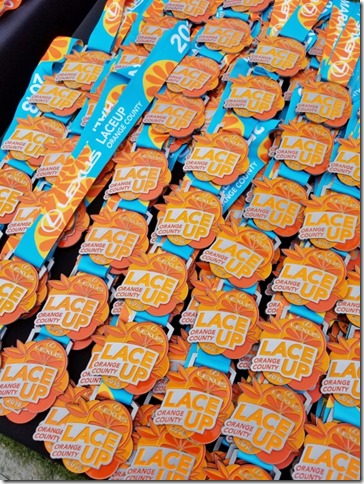 My mom came over the night before and stayed at my place because she was running the 5K. So race morning was more fun than usual having someone to go with.
I did the usual pre-race iced coffee and brought along some cereal in a baggie.
I live pretty close to the race course starting line so I didn’t have to wake up too early. It was easy to get up get ready and get to the starting line.

Lexus lace-up Reese’s are awesome for a ton of reasons. They take post race perks to another level …

food truck brunch – post-race party has amazing food trucks and each runner gets a ticket for a free meal…post-race snacks and water (in addition to food trucks) … beer garden… big area to sit and enjoy the post race events… kids race and games… courses around Southern California are all great locations…printed out photos after the race when you use the hashtag #LaceUpRunning …free race photos (yes – you can get the pictures online after the race)…plank contest (the winner held it for 10 minutes or something!!!!) 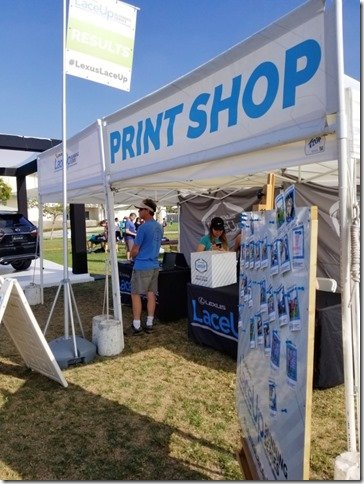 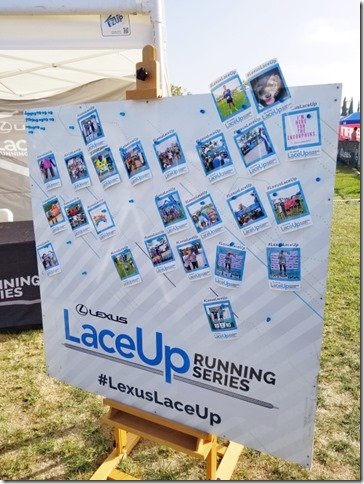 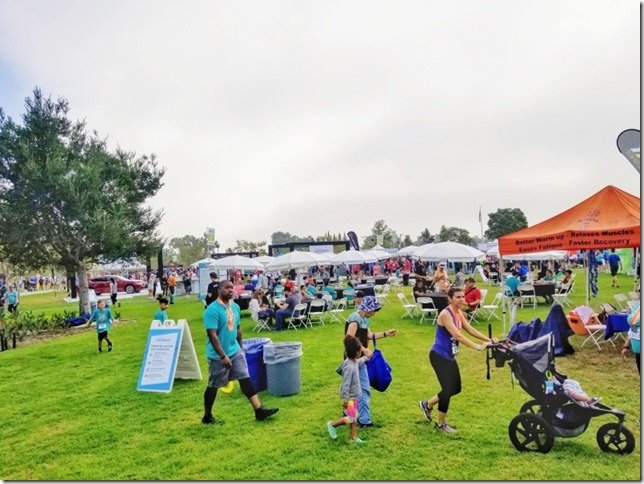 Half marathon at this location is new. Last year there was a 10K and a marathon relay. So this race course was new to me even though I run in this area a lot I hadn’t run this course before.

I love running in Irvine. It’s not super beautiful like running at the beach but there’s too many parks and walking paths that it gives you a lot of options. And Irvine was recently named the number 2 best place in the U.S. to raise a family! 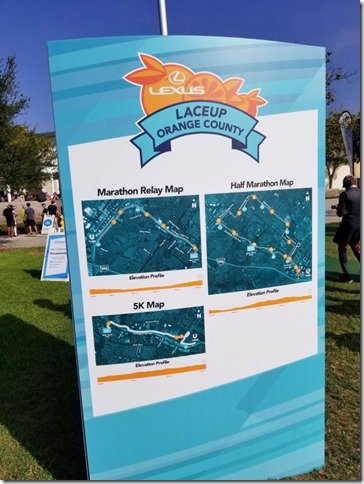 Anyway… the Half Marathon course was a mix of running through neighborhoods and on one of the bike / pedestrian trails. It’s not an actual dirt trail – it’s a road race, but this path is called a trail.

I would say it is in the middle and terms of challenging… It’s not hilly but there are some rolling hills – especially when you are running on the path since it goes under the main streets a few times.
The weather was pretty mild but humid. The marine layer stayed around for most of the race so it wasn’t super bright and didn’t heat up until after I was done.

I haven’t run a race in a while so I wasn’t sure what to expect for myself. I just tried to run strong and get in a good tempo workout. I slowed down around mile 5 to switch up my music – something I wouldn’t normally do in a race but I really liked but random mix my playlist played for the first part of the race and just wanted to hear it again.

Now for the wardrobe malfunction:
I don’t know when it happened but in the last few miles of the race I felt something weird in my left shoe. It wasn’t painful so I just kept going and didn’t think about it. Then, it was becoming to feel more and more weird- like I had something in my shoe? I realized it was the insole lining that bunched up underneath my arch. It was just was kind of annoying at first but slowly got worse as it bunched up more.

At this point I was probably around mile 10 and I wasn’t going to stop take off my shoe and readjust it. Eventually it bunched up until the entire forefoot was jammed underneath my arch. I was wearing the my Brooks Hyperions which are a very lightweight running shoe. Since there’s not thick sole I felt like I was ripping a hole in the bottom of them and I could feel the street underneath my foot! With every step I imagined the insole wearing away until I’d be barefoot!

But the show much go on… or the race must go on?

Point is – it didn’t hurt and I knew it would be a big production to stop, take it off, figure out the problem, fix it – or potentially realize I couldn’t fix it, try to get the shoe back on and start running again. Nah. I just wanted to keep going.

I wasn’t in pain but having the insole jammed under my arch changed my running gait a bit. (If I had more miles to go I probably would have stopped and fixed it because I’d be a little afraid I was running with form that could cause an injury.)  As soon as I cross the finish line I walked out of the way to the side of the crowd and looked at the bottom of my shoe and took it off thinking that I would see a hole!!

But there wasn’t one. Womp womp.

I just felt the ground so much because the shoes are light. When I took it off I saw that the insole was bunched up in the middle of the shoe. This is never happened to me before with any shoes. I think it was the combination of them being newer shoes, the weather being so humid  = and me sweating so much into my sock, old-ish socks and the universe wanting me to have a funny story to tell? 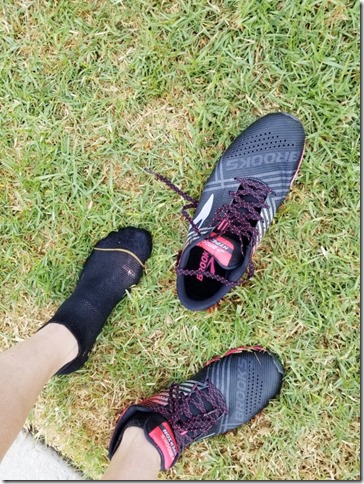 Moral of the story: I don’t know why that happened. And I didn’t make a hole in my shoe or sock.

It was just a very random malfunction and I’m wondering if it had to do with the socks I was worrying or the fact that it was so humid and the sweat dripping down made my socks wet?
Mostly I just think it’s kind of funny and random given I run over 50 half marathons and this hasn’t happened before. 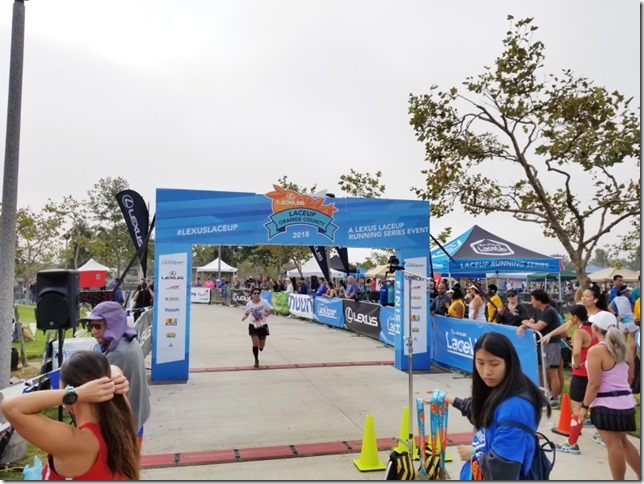 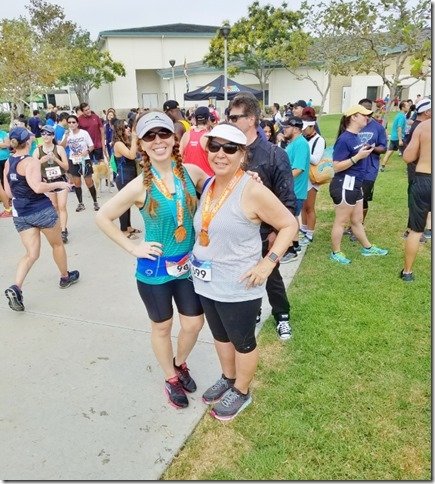 I’m okay with this but want to get faster and need to get my half time down to eventually get my full marathon time down. 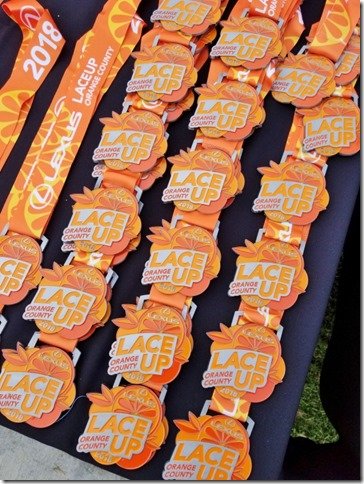 After the race I got to say hi to some of my local runner friends! A lot of people told me Hi during the race too!!
I saw Sandy, Pam, Diana, my running path friend, one of the Sole Runners and so many more! 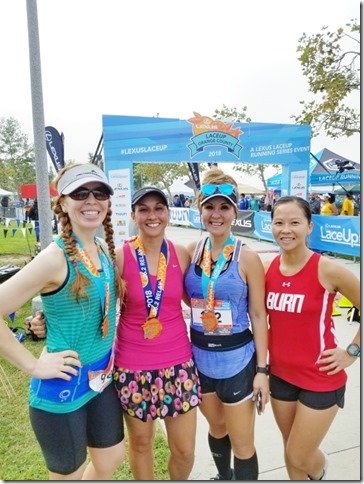 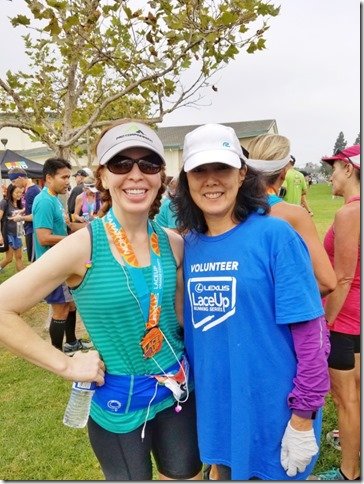 Then my mom and I checked out the food trucks. I ended up going with the breakfast bar because I wanted a donut! So good!! 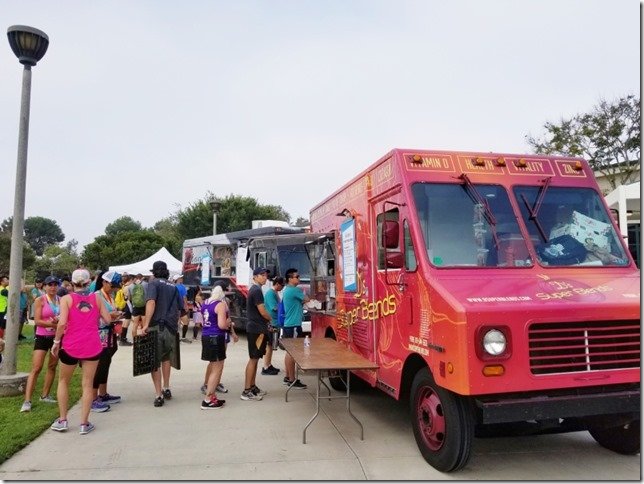 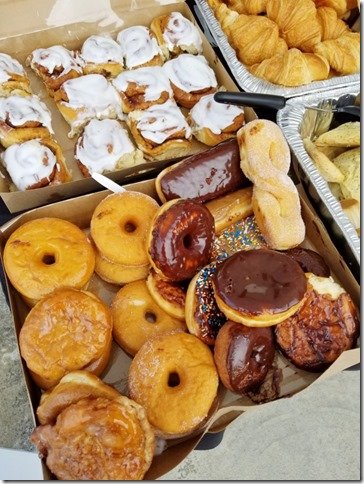 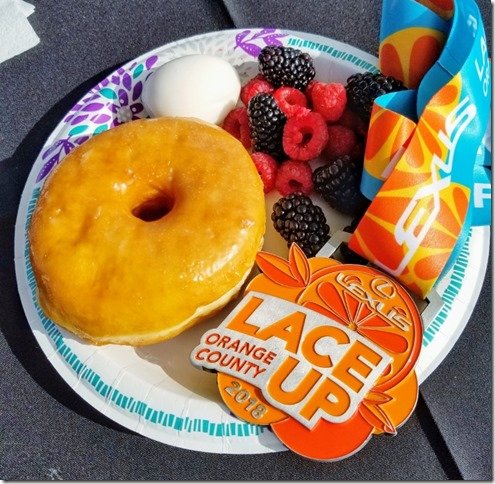 There are more races coming up soon! Check it out and use the coupon code to save on registration… RER10 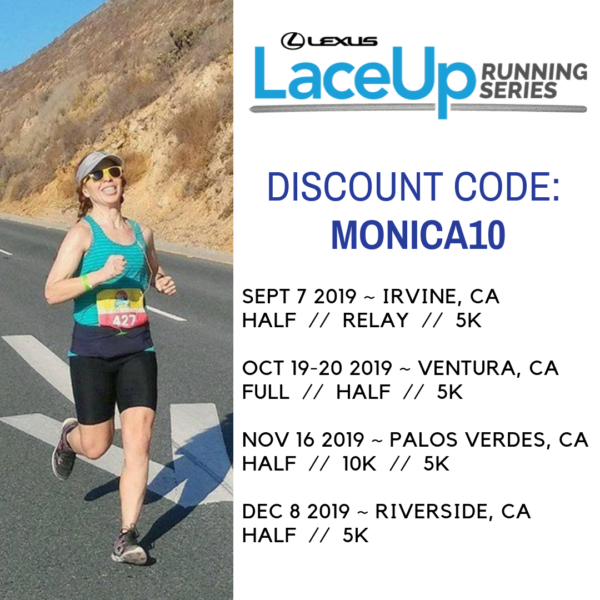 Use the discount code:  MONICA10  to save on the next races in the Lexus Lace Up Series…

Let me know if I’ll see you there!

Previous Post: « 5 questions to ask yourself when you want to quit or skip a workout
Next Post: Gorton’s Shrimp Bowls–New Complete Frozen Meals »

Disclaimer: Please speak with a medical professional before making any changes to your diet or exercise. I am not a doctor or registered dietitian. The views expressed are based on my own experiences, and should not be taken as medical, nutrition or training advice. Please note that affiliate links and sponsored posts may pop up from time to time. I truly appreciate your support. END_OF_DOCUMENT_TOKEN_TO_BE_REPLACED