It’s been less than a month that I started eating chicken again. But in this short time I have made huge strides with Intuitive Eating! Eating more protein has really helped me be aware of my hunger and fullness. Also, now that I have meat on my radar I’ve been having cravings for random things. Like today I had a crazy need to eat hard boiled eggs! So, I made a batch and had one as a mid-morning snack. 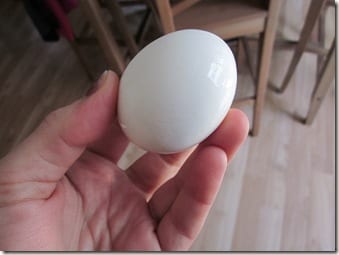 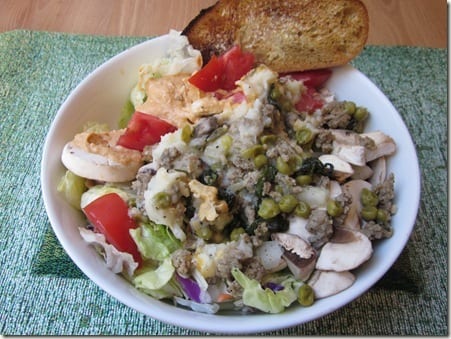 Now it’s time for some Intuitive Eating stuff. If this isn’t your thing, please pass it on

One of the questions I get most often about Intuitive Eating is about how to Make Peace with Food. It is the third step of IE after 1.) Reject the diet mentality and 2.) Honor your hunger. 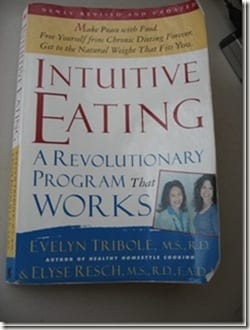 From Evelyn Tribole and Elyse Recsh’s website, this is the description of Making Peace with Food:

Call a truce, stop the food fight! Give yourself unconditional permission to eat. If you tell yourself that you can’t or shouldn’t have a particular food, it can lead to intense feelings of deprivation that build into uncontrollable cravings and, often, bingeing When you finally “give-in” to your forbidden food, eating will be experienced with such intensity, it usually results in Last Supper overeating, and overwhelming guilt.

So if you’re here you should already have realized Diets don’t work and you’re aiming for a life style change. Also, that you should eat when you’re hungry to take care of your body. You still with me? Okay, then we can proceed…

Making peace with food is another way of saying – There are NO bad or forbidden foods.

You can no longer say, “I can’t eat brownies.” Or if you pass up birthday cake because it’s high in calories when you really want a piece – then, you’re doing it wrong. True, there are times when you may  pass up something indulgent because you don’t want to feel overly full or uncomfortable – and that is okay. But, if you are denying yourself something you really want because of the calorie count spinning through your head than you are not making peace with food.

Food is not bad. Stabbing someone is bad (unless they’re trying to steal your food, then it’s permissible). But, food shouldn’t have good or bad labels.

Healthy and un-healthy labels? Maybe. But not “good” or “bad”.

Yeah, but how do you do that?

Well, for me it was a very long process. I used to tell myself I shouldn’t eat cereal any more and in preparation to “give up” cereal I would binge on it. I probably ended up eating  a week’s worth of it in one day. So, giving it up for a week was canceled out. Fanfreakingtastic.

This happened with a few different foods when I was trying to create a diet to help me lose weight. I would swear off ice cream or white bread or Clif bars only to end up eating them more because I thought I couldn’t or shouldn’t.

Finally I told myself it was all good. I could eat any food I wanted, but I should only eat it until I’m full. Since years of binging and restricting had killed my hunger signals, this was very hard.

I over ate these newly “okayed” foods sometimes. But, since I knew I could have them again tomorrow, and the next day, and the day after that… I didn’t feel the need to eat the whole box now.

Slowly I realized that if I eat 4 bowls of cereal I feel bloated afterwards. Plus, I’m still hungry after! And when I eat ice cream while standing in the kitchen at 4 o’clock in the afternoon I feel like crap for the rest of the night.

So, when I bought dark chocolate peanut butter cupsin October I joked that I would eat them all in one night. A lot of readers said they wouldn’t be able to control themselves if they had these in the house. 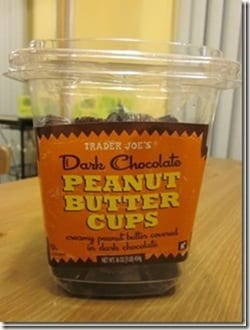 But, the reality is – they lasted for a few weeks between Ben and I. Sure I may have had one too many for dessert a few times, but I never shoved them in my mouth in an out of control binge either.

I know that if I eat 8 PB cups I’m going to feel crappy. My stomach won’t really hurt (because it’s an iron cauldron and I can really eat anything), but my energy will rise and plummet so I’m useless, and my blood sugar will want to be spiked back up and instigate me to binge.

I learned that the hard way, but now I know.

Even though I have made Peace with Food there are still times when I over do it. There are times when I amthisclose to buying the new Cinnamon Cheerios, but put them back on the shelf (even after they’re ridden around the entire store with me in happy anticipation of being eaten) because I know I’m in a bad place mentally and will eat them all that night. That happened this weekend. 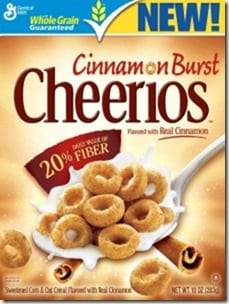 So, like so many other things in healthy living it’s a balance. I let myself have full permission to eat things that were formerly forbidden like granola, ice cream, cheese. But I also try and pay attention to how I feel and how I want to feel for the rest of the day.

If I want energy to run tomorrow then I should eat a good meal for dinner. If I want to avoid binging in the afternoon I should have nut butter with breakfast. And if I don’t want to feel bloated for the rest of the night then I shouldn’t eat 4 bowls of cereal, a Vitatop with PB and a handful of chocolate chips for dessert. Not that I do that. Anymore.

Disclaimer: Please speak with a medical professional before making any changes to your diet or exercise. I am not a doctor or registered dietitian. The views expressed are based on my own experiences, and should not be taken as medical, nutrition or training advice. Please note that affiliate links and sponsored posts may pop up from time to time. I truly appreciate your support. END_OF_DOCUMENT_TOKEN_TO_BE_REPLACED