Hello! How’s it going? Have you ever been to Medieval Times? I went when I was a lil kid and this weekend my family went to celebrate my dad’s birthday. I’m pretty sure I’ve only been there once before when I was in 3rd grade and somehow I don’t think anything has changed about this Dinner and Tournament! (But I have a bad memory so maybe I don’t remember it either way.) 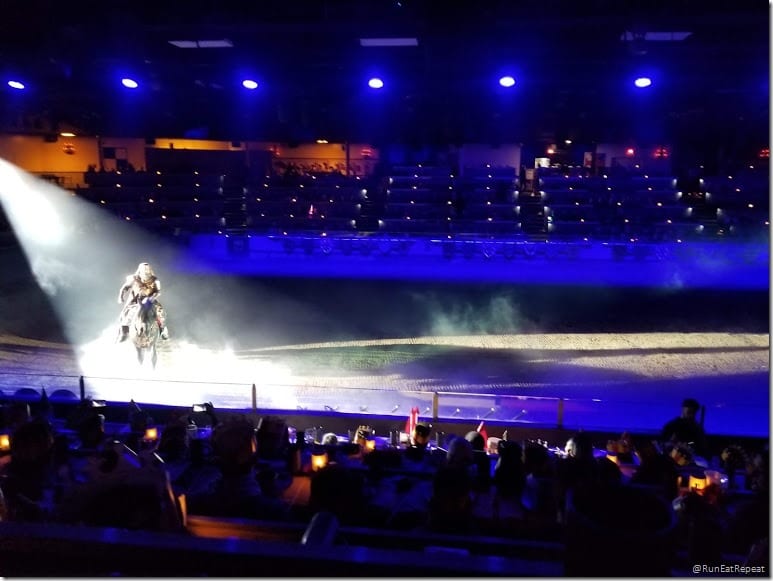 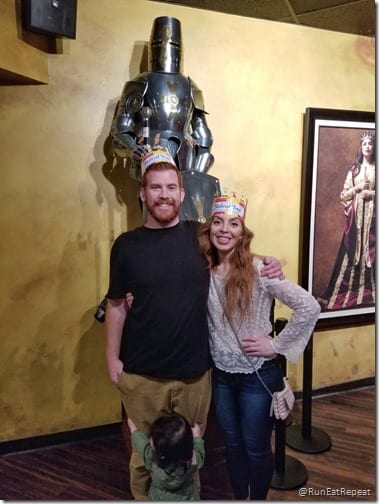 If you’re not familiar… Medieval Times is a dinner show set in the Game of Thrones time period. You don’t usually learn about GOT history in school because the government doesn’t want you to know –  but there was a lot of violence and old timey bad words and es – E – ex and the like. I guess not too different from every other time in history…

Medieval Times puts on a show where knights compete to win different games and battles. Each knight represents a certain color and the audience gets hats of the same color and sits in the same section to cheer on their knight.

We were the red and yellow team… or coat of arms…?

Tip: My family has very LARGE heads and the hats fit us, so they’ll fit you too for sure. (I feel like everyone says “I have a big head…” but they really don’t and then I feel bad when I can’t fit into their-supposedly-large-but-not-really hat.) 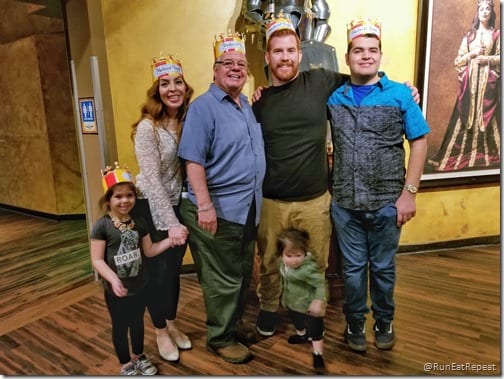 Thoughts on the food:

I’d never eaten Baby Dragon before! It tastes just like chicken. It was really good.

Garlic bread – usual restaurant garlic bread. Soup – I was happy this was served hot. I like soup and tea served HOT and it’s a big production to feed this huge banquet of people so I tried to keep realistic expectations on the food.

Corn – good! Potato – it was basically like a huge seasoned french fry. It’s half a small potato, seasoned and fried.

Cake – reminded me of the Starbucks lemon loaf cake 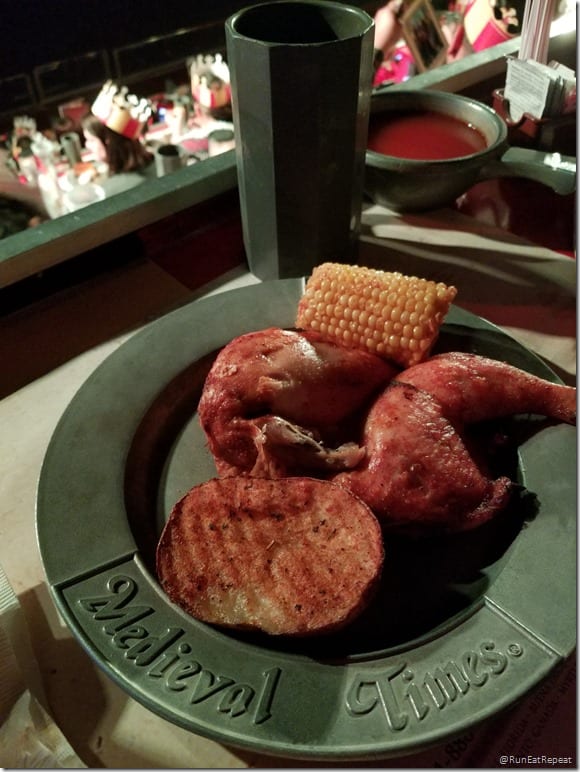 It was hard to take pictures of the other food because they turn down the lights as the show is going on. I thought everything was good. The potato was fried but nothing else seems super heavy. The chicken was seasoned well. The soup might have had oil but it didn’t seem to have cream. There aren’t any substitutions unless you’re vegetarian. (Note: I was super hungry because I had missed lunch so keep that in mind with my review.) 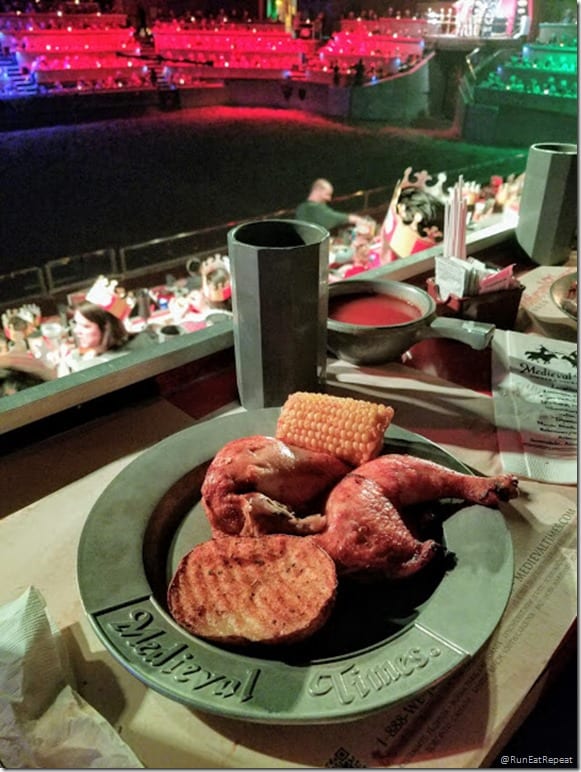 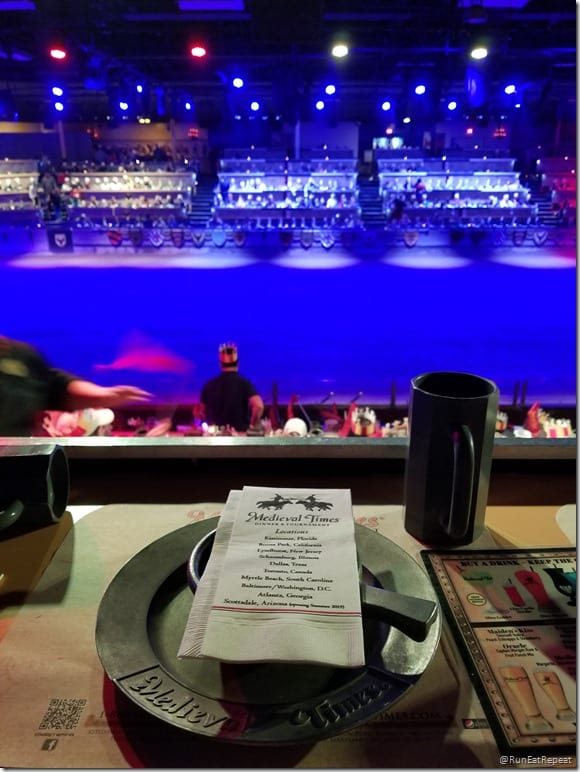 When you walk into the area – each place setting has a metal plate, bowl and napkin with all the locations. I was surprised there are so many of these!! I grew up in Southern California so I’ve been lucky enough to have a ton of theme parks and tourist attractions and restaurants around to enjoy. Disneyland,Universal Studios and Knott’s Berry Farm are all local options that I went to as a kid.  But I realize that’s not the case everywhere.

So I just assumed Medieval Times would be in SoCal and maybe Orlando but that’s it. Have you been to one? I went to the location in Buena Park, CA. There are 9 locations total.

– Also have you been to Hogwarts aka The Wizarding World of Harry Potter? I was thinking about going and now I’m listening to the Harry Potter books and want to get tickets and see all the magic!! Send me tips if you know any. 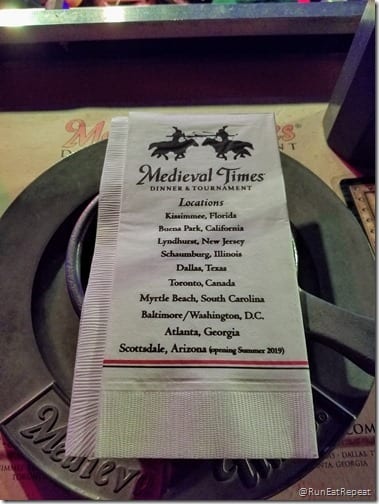 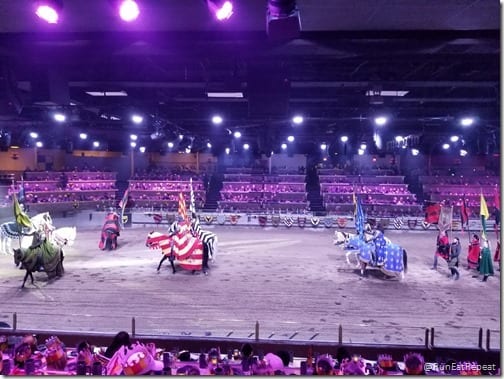 It’s a 2 hour medieval jousting tournament with 6 competing knights. They use real weapons, ride horses and battle on foot.

They start off with a few games – for example the knights ride their horses around the area and try to snag rings with their jousting poles.

The big show is when they battle. The knights are paired up to try to knock each other off their horse. Then they take it to the floor and fight with swords or other medieval weapons. One of the knights had a big ball on a chain.

It sounds so real and looks like someone could get hurt. They’re very professional and good at putting on a good show.

My niece was so into it. My mom got her a flag and she was waving it and cheering during the games. Then, when our guy came out to battle she said, “Nina can you hold this…” and proceeded to cover her mouth with her hands. She was worried! It was adorable. 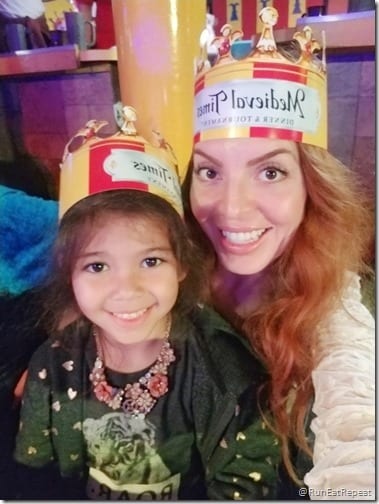 I think Medieval Times is probably the most fun for kids 4 years old to 12 years old and people who love game of thrones or guys with long hair.

My other niece is 1 and a half years old and clapped when other people were clapping. She wasn’t scared or anything.

My favorite part of the whole event was watching my niece’s face as she watched the show. She was soooo into it. Love it!!

Next time I’d definitely try to dress like Khaleesi to really get into the Game of Thrones theme. (Speaking of Queen Daenerys… I should note – the dinner was chicken not baby dragon.) 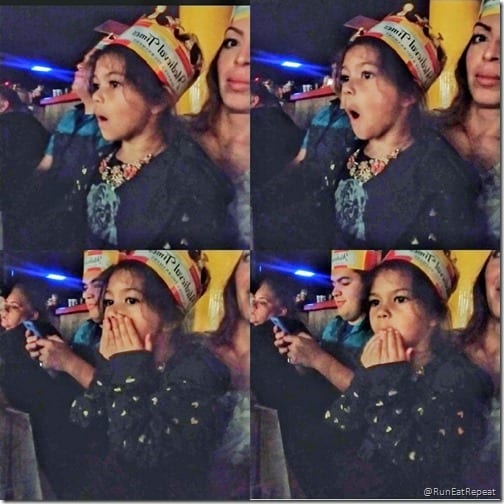 Have you ever been to Medieval Times? Something similar?


Do you use a gps watch, app or paper to count up t

How do you Treat yourself?

How do you Treat yourself? Fun Run Challenge Day

Disclaimer: I am not a doctor or registered dietitian. The views I express are mine alone, based on my own experiences, and should not be taken as medical advice. I am a certified running coach, but am sharing my own training – not providing a program for you. Please speak with a medical professional before making any changes to your diet or exercise. Affiliates: Please note that affiliate links and sponsored posts may pop up on RER from time to time. I greatly appreciate your support!  END_OF_DOCUMENT_TOKEN_TO_BE_REPLACED