Wow. Friday was The.Best.Day. I have been bursting with excitement to tell you all about how I met Meb and Ryan Hall and Deena Kastor!!!  I can’t even handle it. 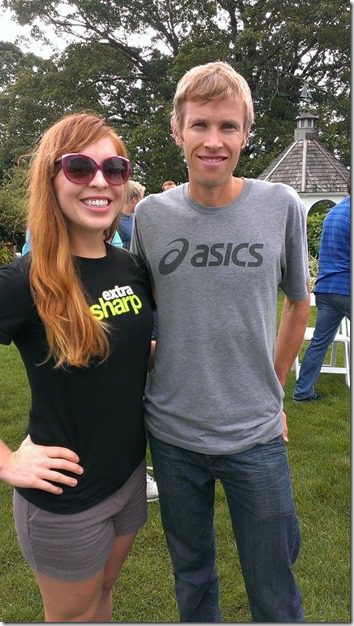 First let me back up a step… I got into Maine super late Thursday and took a cab to the Inn. We stayed at Higgin’s Beach Inn and it was the cutest! 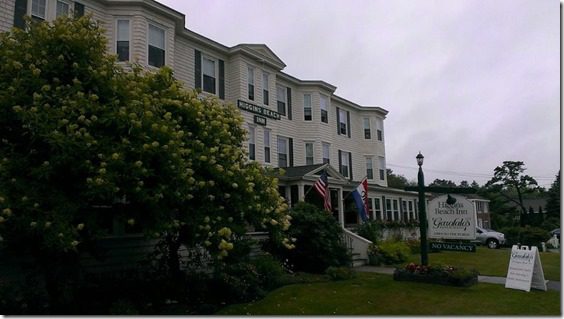 I woke up and took a walk down to the beach on Friday, but it was drizzling so I headed back pretty quickly. 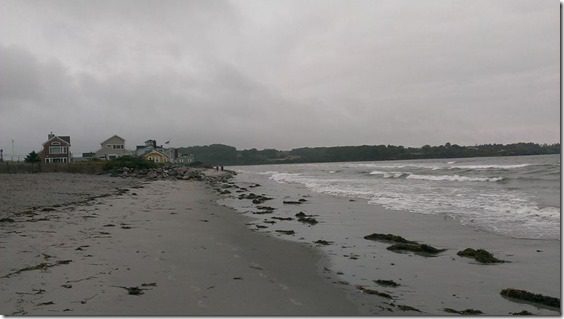 We had breakfast at Higgin’s. They had really good food! ( I had lunch there later too.) 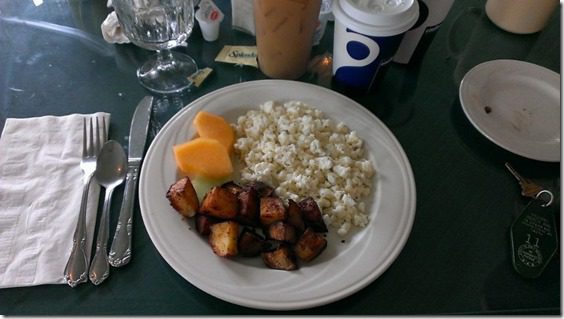 Then, we piled in the cheese van and headed to the press conference for the Beach to Beacon 10k. I made a ton of cheezy jokes on the way 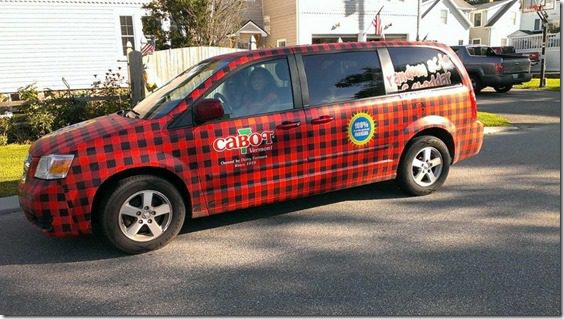 This is the biggest road race in Maine and a VERY popular one too! There were A LOT of elite runners. The race sold out in under five minutes this year. 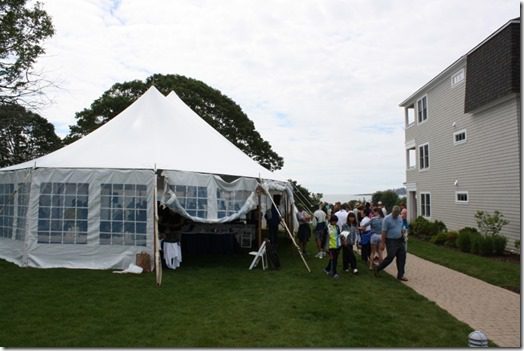 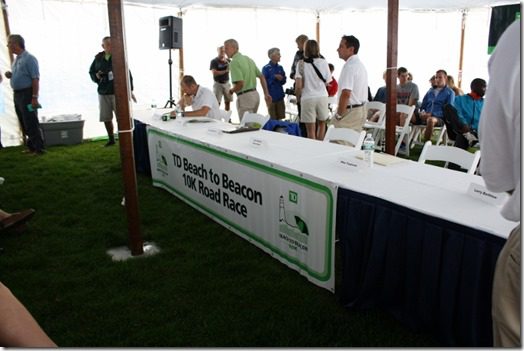 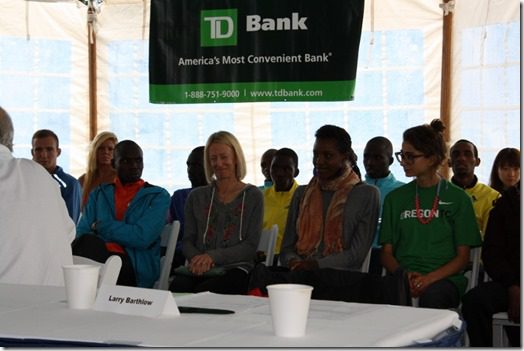 I spotted Ryan Hall and Meb right away, but tried to act cool. (Tried is the key word there. I was probably more like an 8 year old girl meeting One Direction.) 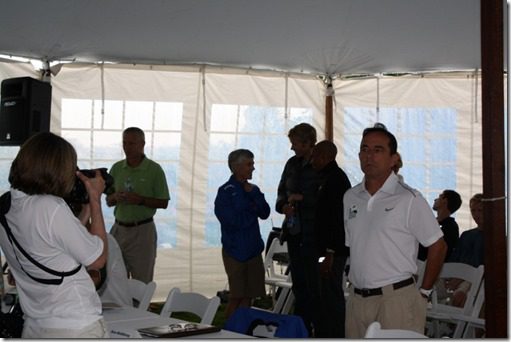 After the conference the elites were available to for questions and pictures. I got it together and went up to Ryan Hall who was the the nicest!

Then, I met Deena Kastor! We talked about traveling from CA to ME. It’s a long haul, so I’d like to think we bonded a bit. 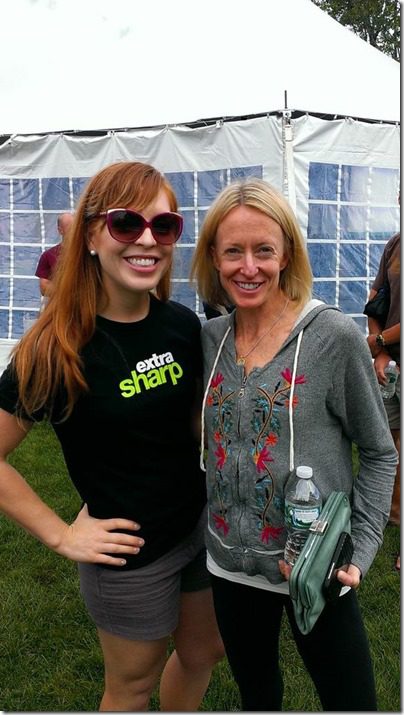 I feel like I had already met Meb since he hails from just down the way in San Diego. I asked him the most important questions of the day which is obviously, “What are you going to eat tonight before the race?” He said “Pasta!” pretty excitedly. So we should all eat pasta before a race from now on. Do it. 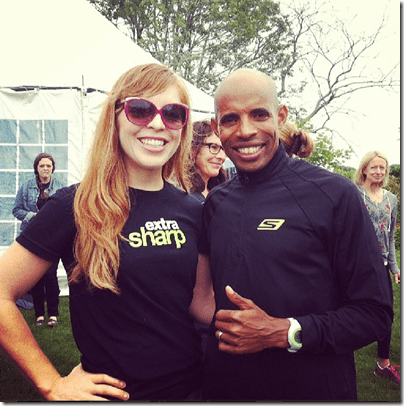 (Spoiler: I ‘ran’ into Meb again after the race! More on that later!!)

After the conference we headed to Ridley farm.

Cabot works with family famers and the company has very strong relationships with the people who produce the milk for the cheese. This farm was close to the Beach to Beacon race so we were able to visit them and their cows. Three Ridley family members ran the race with us too! 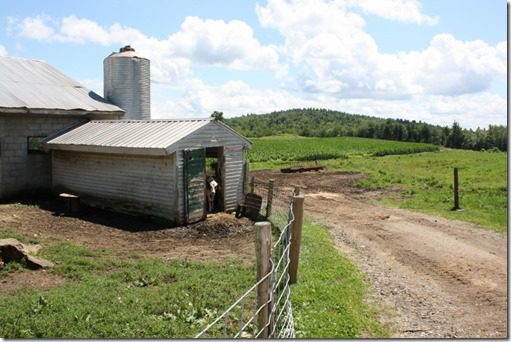 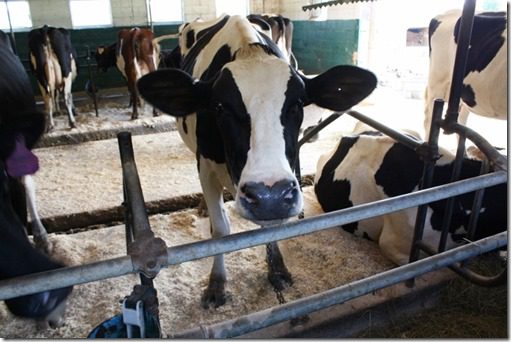 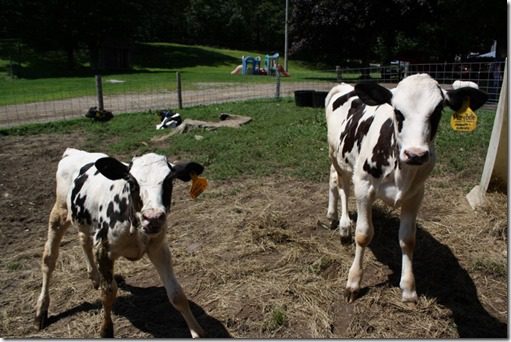 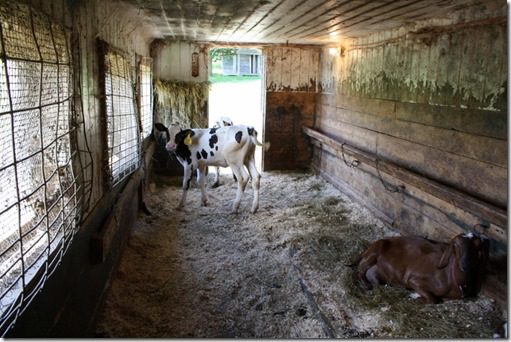 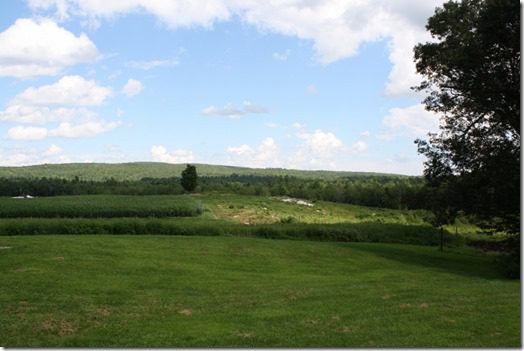 The Ridley’s are one of the 1200 farm family owners of the Cabot Cooperative who live in New England and New York.  Most of the farms are considered ‘small’ – the smallest one only has 16 cows. I love that this huge company still works with the little guy. For more information check out the Cabot site here. I learned a lot on this trip, but I’m no expert so check that out for a ton of cool info and a virtual farm tour! 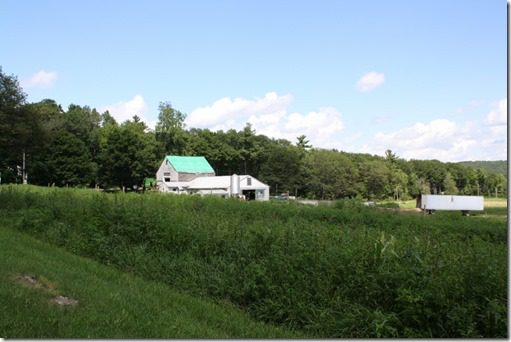 The cows at Ridley farm all have names.  When they are brought in to be milked they walk right to their spot! I wonder if they can read their name or just know where to go… 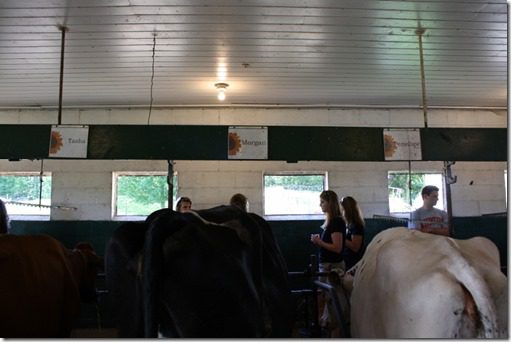 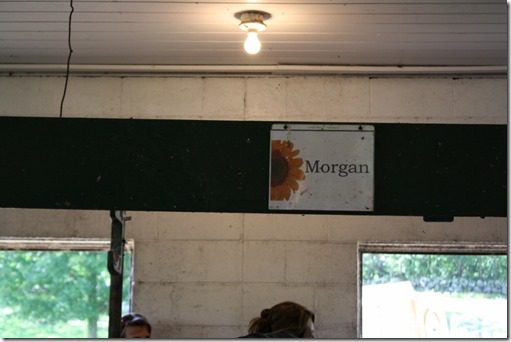 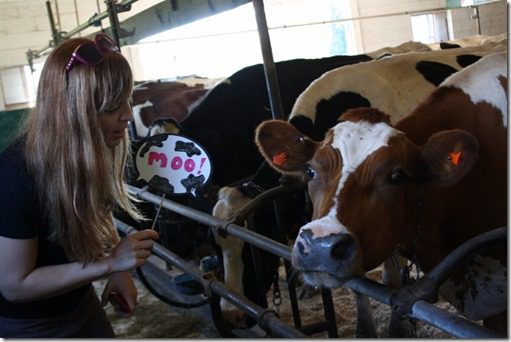 I am super curious about how farms ‘work’ so it was great to ask a ton of questions. The family is up by 4am to milk the cows each day. They milk them twice a day. 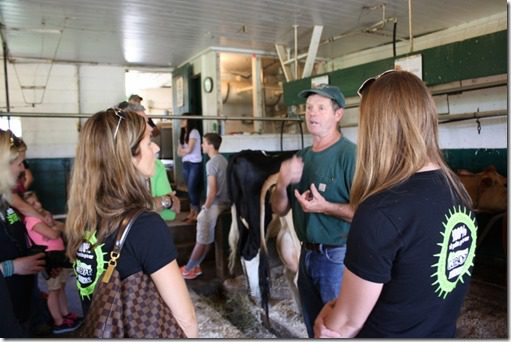 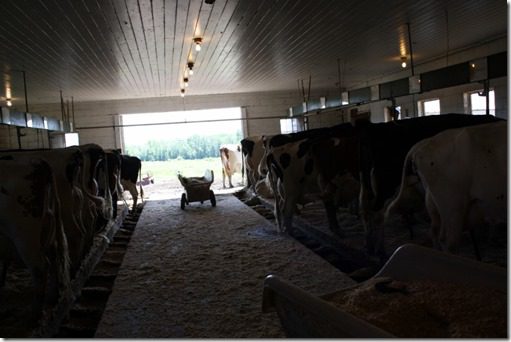 A truck comes to pick up the milk every two days. Until then it’s stored in this refrigerated tank. 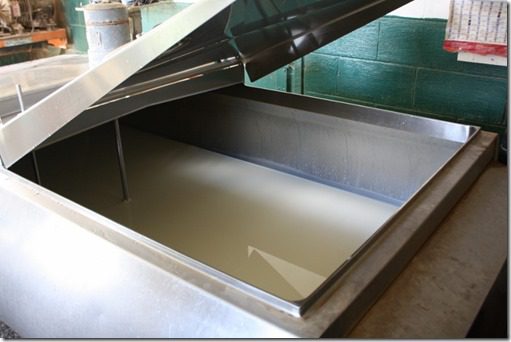 After hanging out with the cows for a while we had a picnic lunch outside the family’s house. It was awesome to be able to hang out with everyone and experience all the beauty. 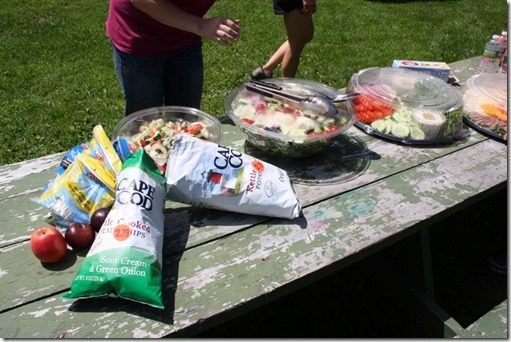 I keep saying I want a simpler kinda life one day and I thought something like this would be it – but farming is a TON of hard work. Plus, these family farmers never get a day off because the cows need to be milked and other animals and plants need to be tended to every day. I fell in love with the idea of it though… 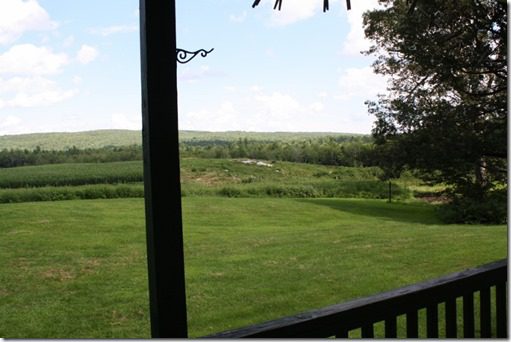 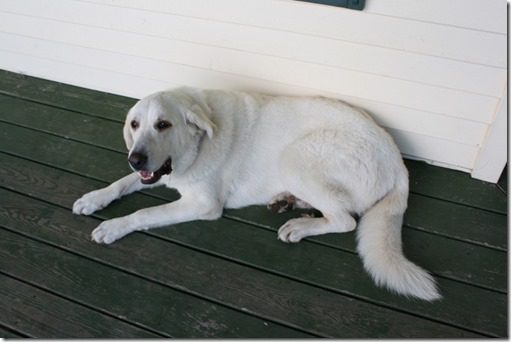 And as if all of that isn’t enough – we had dinner HERE. Gorgeous. This picture doesn’t even capture it. Heaven. 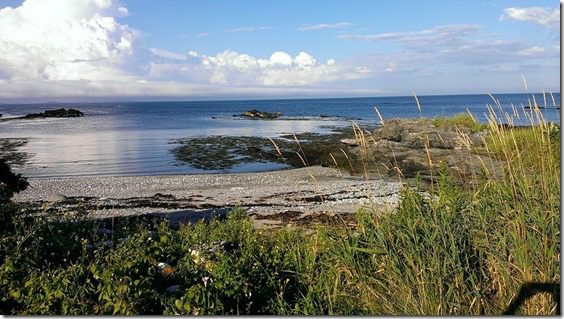 Updated to add video of traveling to Maine:

Question: Should I pack it up and be a farmer in Maine? Would you?

I’m tempted. But my friend Leann responded to my announcement to stay in Maine with one word that would scare me away: “Snow.” She knows me well!

Disclaimer: I am in Maine with the Cabot Fit Team, a group of bloggers and farmers put together to connect and spread the word about a healthy lifestyle. This trip was organized by Cabot. All opinions are my own.

Disclaimer: Please speak with a medical professional before making any changes to your diet or exercise. I am not a doctor or registered dietitian. The views expressed are based on my own experiences, and should not be taken as medical, nutrition or training advice. Please note that affiliate links and sponsored posts may pop up from time to time. I truly appreciate your support. END_OF_DOCUMENT_TOKEN_TO_BE_REPLACED