Hello peeps 🙂 Hope you all had a good day! It’s Wednesday night, which means the weekend is peeking around the corner. Hang in there! (That speech was more for me than for you.)

I don’t think my frozen meal, salad and apple lunch was enough food because I was hungry an hour later. I managed to postpone my snack until 3pm (between class and lab),  but left class super hungry three hours later. 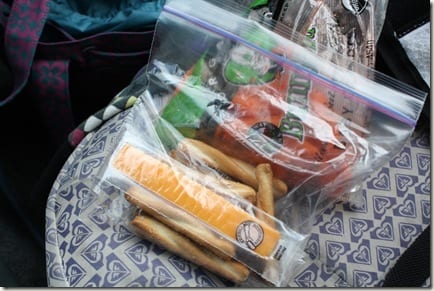 I rushed home and dug into Ben’s powdered donuts -which I bought him, so I take full responsibility for that indiscretion. And I made a quick dinner so I could get some real food fast – sweet potato and leftover roasted chickpeas and sprouts. 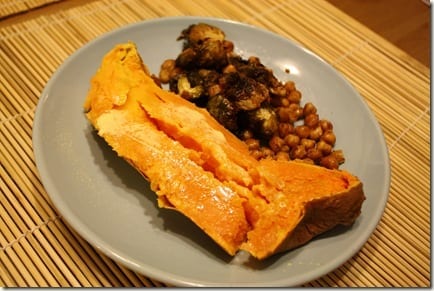 After dinner I recreated my amazing “It’s Green, but it tastes like Chocolate Peanut Butter” Smoothie. Even Ben loves this one.

Then, prepare to be amazed. 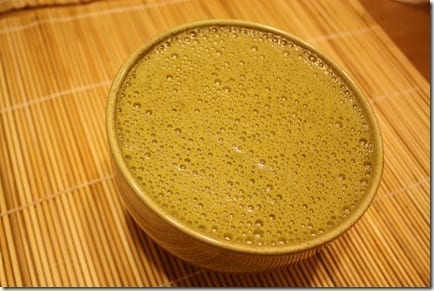 Intuitive Eating stuff – After going over some old notes from sessions with my RD, I think I’ve gotten away from the thing that was preventing overnight eating/binging (a very destructive habit I’ve had for a very long time). I recently mentioned you should

That is similar to something Evelyn suggested to me a while back. She said I need to either a.) eat bigger breakfasts and lunches or b.) have a big afternoon snack (like a small meal).

I was doing that for a while and everything was going smoothly, but I think I lost track of that effort and my breakfast and lunches are leaving me for want. And trust me, that want gets satisfied when I get home at 6:45pm to an empty house and a full kitchen.

Anyways, I’m going to make sure to eat a breakfast and lunch a little higher in calories and see if that gets me back to a good place with night time eating. I was doing well for long enough that I think this plan works with me. I really don’t have the time for mini-meals, so that is not an option. My schedule really only gives me time for 3 main meals and one snack.

*Side note – I’ve received several requests to blog about Intuitive Eating more. I hadn’t addressed it for a while because I was doing very well with it and felt good 🙂

I was observing what was working and what wasn’t without writing about it. But since I’m having a hard time and have been asked to address it, here it is.

If this part of RER bothers you, feel free to ignore it. I totally understand 🙂 I know it can be boring or “weird” if you don’t “get it” or don’t have similar issues.

Disclaimer: Please speak with a medical professional before making any changes to your diet or exercise. I am not a doctor or registered dietitian. The views expressed are based on my own experiences, and should not be taken as medical, nutrition or training advice. Please note that affiliate links and sponsored posts may pop up from time to time. I truly appreciate your support. END_OF_DOCUMENT_TOKEN_TO_BE_REPLACED