Here’s my Surf City Half Marathon 2021 Recap and Results. I’m keeping it short because I have a PB&JAM packed day. Scroll to the bottom of this post for links to the Race Discounts page which I’ll be updating with more coupon codes soon.

Okay. Let’s start at step 1 of every race weekend – the race expo. This is where you get your race number (aka bib) and ‘free’ shirt (aka $80 shirt you’ll never wear after race day). The best part of the expo is you can buy full priced running gear that you really shouldn’t use for the first time on race day. But, I’d like to believe shopping helps calm pre-race nervousness so go for it.

Actually, I WON a STAND UP PADDLE BOARD in an expo raffle one year so I’m all about enjoying all the offerings a race expo has if you have time.

The Surf City Marathon and Half Marathon expo is set up in the Huntington Beach parking lot. There’s usually a BIG tent set up to pickup your number, shirt and a lot of booths featuring vendors selling all the best running gear, snacks and supplements.

This year the tents just contained the bib & shirt pick-up and the race logo gear. All the vendors were lined up outside, which was an even better set-up than the usual because the weather was GORGEOUS. God Bless California. The ocean is set back a ways from the parking lot but you can see it from where we were and feel the perfect ocean breeze. I wanted to stay and hang out but had to be in and out fast. 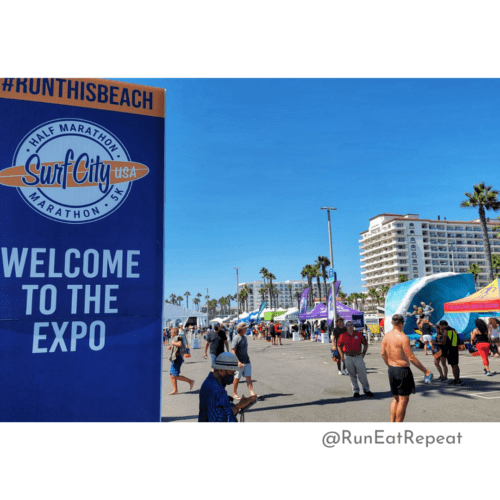 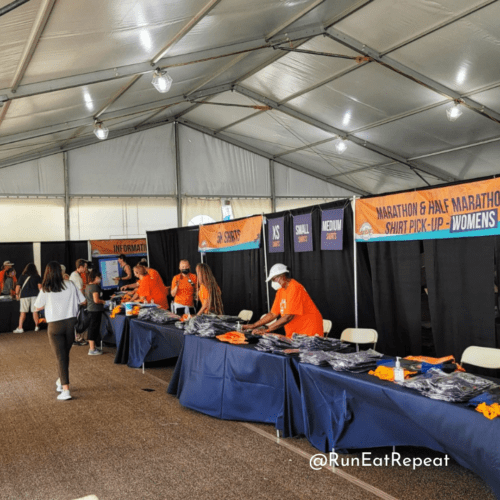 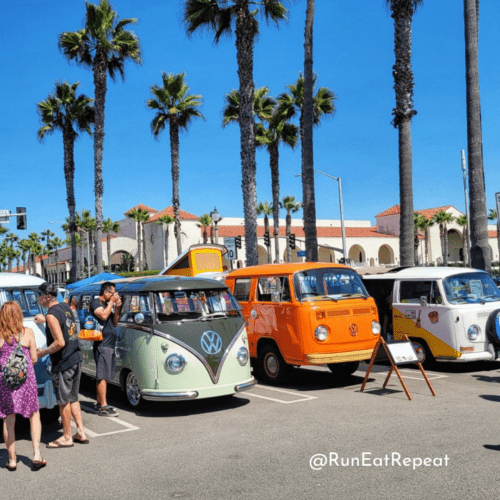 I don’t know why but I was super tired the day before the race. So, when I got home from the expo I walked Diego, ate dinner and relaxed while watching Gossip Girl (the old series – I discovered it recently and am so into it). I set out some running gear options, but didn’t do a ‘Flat Runner’ because I was powering down fast and knew I should decide what exactly I’d wear in the morning.

My running buddies and I decided to wear red, white and blue in memory of Sept 11th (which happened to be race day). So, I pulled out my running clothes that went with that and went to sleep.

Race morning Kristin picked me up bright and early so we could go together. The marathon started before the half marathon so I thought we might have trouble finding parking. I’ve run this race several times and it’s only happened one time that I had to park in a lot pretty far away and take a shuttle to the starting line.

The only tiny concern I had with this was – there were signs at the expo that you had to wear a mask on the shuttles and I didn’t pack an extra disposable mask for this. (This is a lil reminder to myself to put some extras in my purse and car just in case!)

We parked in the beach parking lot and walked along the boardwalk to the start line. The beach restrooms were open so runners were able to use them. This really helped keep the porta-potty lines at the start short. And the beach restrooms have better ventilation so it’s a more pleasant experience all around. Also, it makes it easier to follow the Number 1 Rule of Race Day. 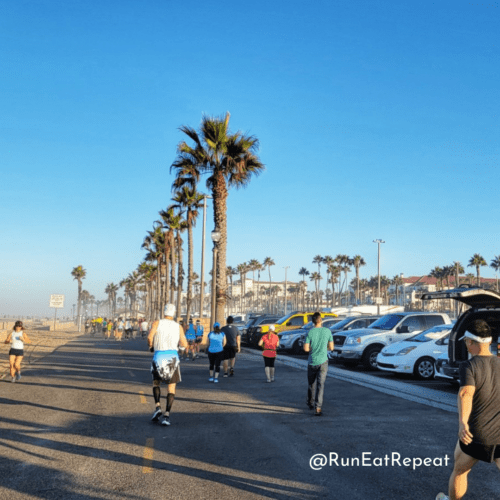 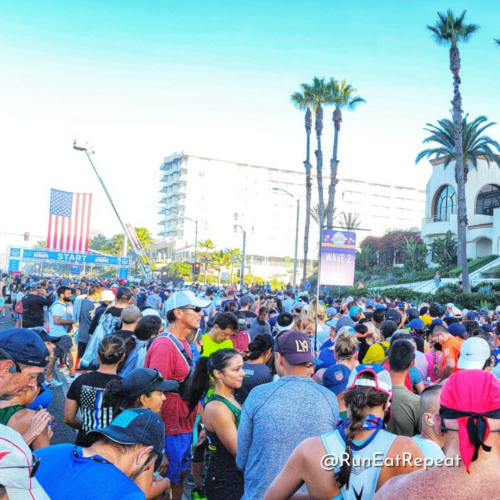 I’ve run the Surf City Marathon and Half Marathon in the past so I was familiar with the course. But the race is usually in February (specifically Super Bowl Sunday) every year, so it’s usually a lot cooler. And this year the half marathon started pretty late, probably the latest I’ve ever seen a half start time actually! Which made it feel A LOT HOTTER than usual for this race.

Luckily, I don’t mind the heat that much but I wasn’t a fan of the late start because the sun was beating down by the end and I felt myself starting to get sunburn (which stresses me out – and stress is the real killer).

I thought the course was pancake flat because it’s at the beach, but the end does go uphill a bit on PCH. It probably wouldn’t feel very uphill if that part was at the start of the race when your legs were fresh. But it’s during the last few miles so you have to push. 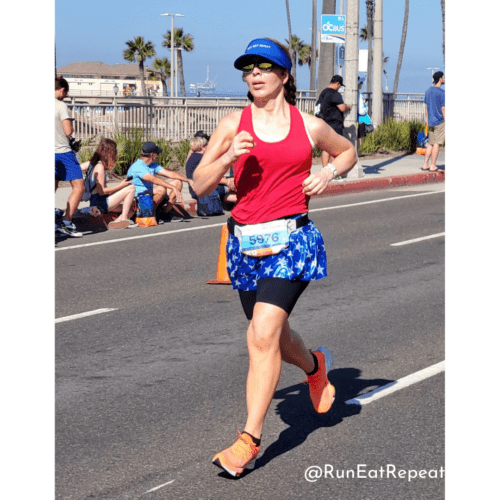 My Race: I couldn’t get in the zone the entire time. I usually take a while to warm up, but around mile 8 (this depends on my fitness level) I feel warmed up and can knock out a handful of miles feeling GOOD. I can also figure out around that time who showed up for the race – Magic Monica (the magically fast runner with tons of speed and endurance) OR some b!tch I don’t know (who is slower and makes excuses – she’s not invited to races and I’m telling her tonight).

Anyway. When I’m in good shape running 13 miles doesn’t feel hard, but this did. I kept checking in with myself to see if I could push to run faster. I wanted to speed up at the turn around point near mile 8, there’s a water station and I figured I could walk through it to get water and have a gel. Then, I’d take the training wheels off and speed it up.

But, the water station was OUT OF WATER and I miscalculated the gels. I thought they had them on both sides of the street and I’d get one on the other side, but that was wrong. So, no gels and no water at mile 8 didn’t help the situation. I should have brought my own gel – that was completely my fail. Some races run out of gels, sometimes it’s a gross flavor, sometimes the aid stations handing them out are a lil chaotic. For full marathons I pack my own, but I play a lil looser with half marathons since the consequences aren’t as big. But the water situation didn’t help on a hot day.

Again, I’ve run Surf City many times. I’ve never seen a water station run out at this race in the past. I’m also slower than I’ve run in the past so maybe it’s happened before? I think it was a lil bump in the road due to the race being on a hotter day AND having so much time since the last race. I’m giving them the benefit of the doubt considering it’s been a good experience several times in the recent past.

Oh, and THERE WAS A DOG ON THE COURSE. It had a lil harness but must’ve gotten away from it’s owner? I looked around and I don’t think the owner was a runner. 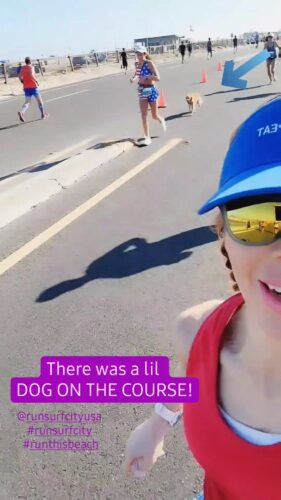 The BEST part of the race was getting to run with my friends again. I missed this sooooooooo much. I’ll link to them on Instagram below. 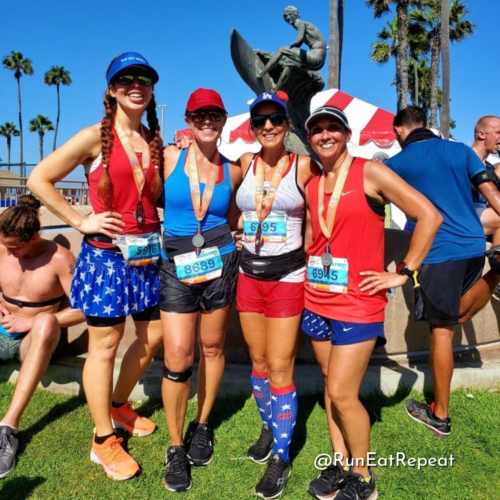 Meh. I’m not happy with that time. I should be faster and further along in my training at this point. But the numbers don’t lie. If I was faster or more fit I would have run better. I need to look at my training and recovery and make some changes if I want to run faster and feel stronger in my upcoming races. So, I have a lot of work to do! 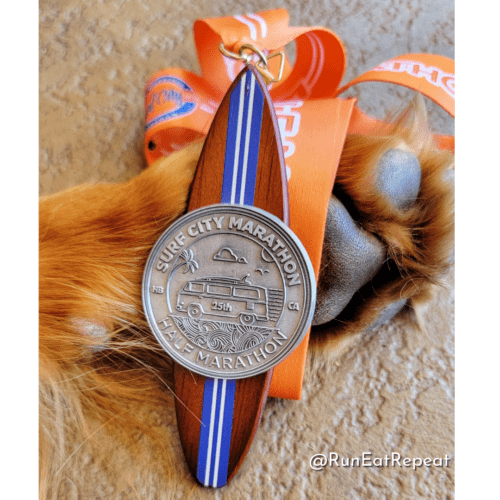 I crossed the finish line and met a few followers. Somewhere around mile 7 I lost Pam, Sandy and Kristin so I waited for them while chatting. Everyone came through fairly quickly – even Kristin who joked she was going to Run/Walk the whole thing slow. 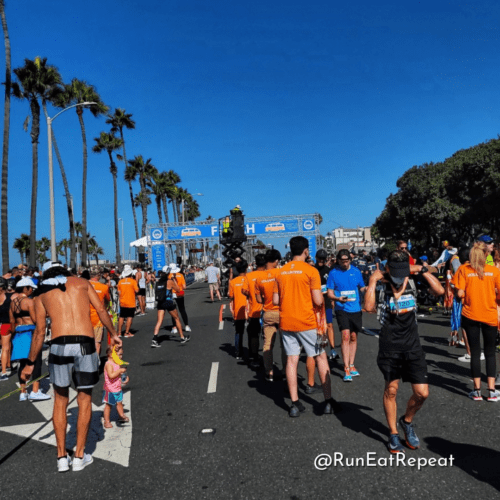 After the race some people made a beeline for the beer garden. And by ‘bee line’ I mean they made a lil BUZZZZZZ sound as they walked and periodically wiggled their butts on flowers.

I’m not a fan of beer, but I’m the biggest fan of chocolate milk so I was happy to see it being handed out after the race. And I didn’t a happy dance when I saw the Real California Milk seal on the truck. How perfect!! I love seeing that and have to stop myself from telling people at the grocery store. 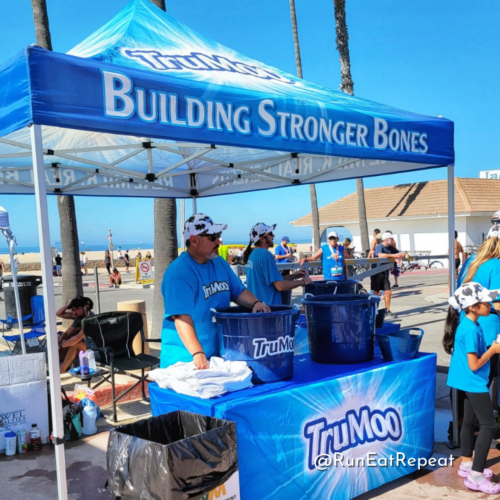 After the race I asked Kristin to take some pics I could use to become an Instagram model. Please like and follow and subscribe and buy everything I link to and tell a friend and Venmo me $5 and leave a 5 star rating and review. Thanks. xoxo. 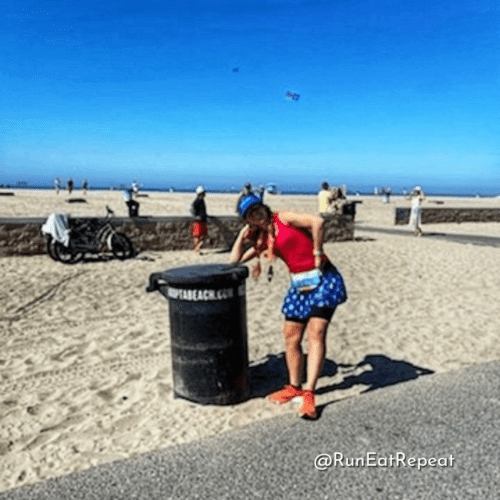 Then, I went home to relax and eat 13 watermelons. I ended up watching an old documentary called 9/11 and starting Worth, a new movie about the victims’ fund.

The doc called 9/11 is by two brothers who happened to be doing a documentary on NYC firefighter recruits at the time. They happened to be filming that day and one of the brothers went with the team sent to the Twin Towers. The other one stayed at the station with the one recruit who stayed back to man the phones. 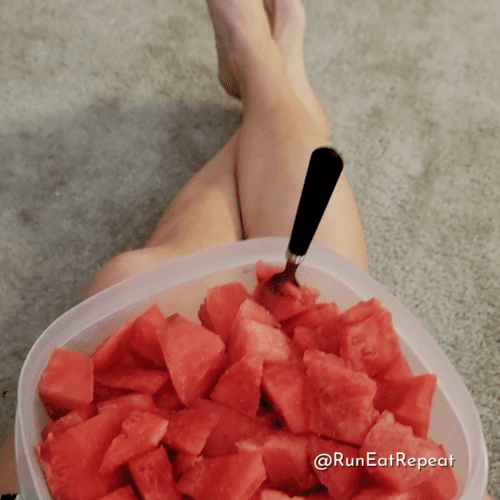 9/12 is a 7 part podcast series on how 9/11 impacted America in different ways. I’ll probably start listening to it tonight when I walk Diego. I just heard a review of 9/12 on the Crime Writers On podcast along with a review of the documentary LulaRich.

Listening to: 9/12 Podcast – 9/12 is available on Amazon Music here (I think for free as I don’t have Amazon Music and do have this podcast), Wondry and most podcast apps.

Question: What are you watching and/or listening to right now? See or hear any of these?

Disclaimer: Please speak with a medical professional before making any changes to your diet or exercise. I am not a doctor or registered dietitian. The views expressed are based on my own experiences, and should not be taken as medical, nutrition or training advice. Please note that affiliate links and sponsored posts may pop up from time to time. I truly appreciate your support. END_OF_DOCUMENT_TOKEN_TO_BE_REPLACED