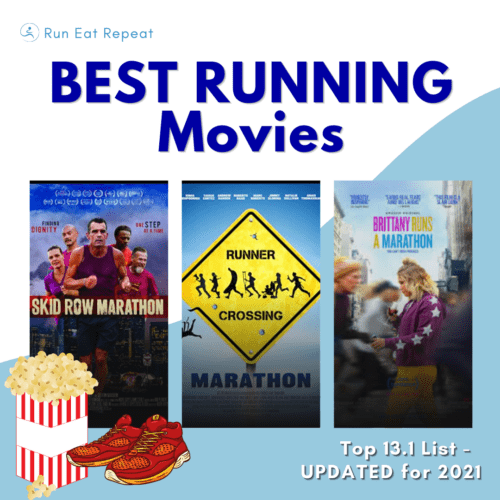 For a long time I had a list of running movies I’d recommend and the top spots were always the same. I always suggested the top 3 to runners looking for some run-related entertainment or inspiration. But, the list has changed over the past year! I watched several new movies and series about running and three of them need to be added to the list. So here’s the updated list of best movies about running (below). And let me know which of these you’ve seen and what’s your favorite!

This is a new list of movies mainly about runners, running or a specific race (usually marathons or ultra marathons). The list is in no particular order (because I kept switching the order). Most of these are available to stream on Amazon or Netflix. And under this list is a short run down of what each movie is about and who should watch it.

Click the titles for links to where to watch each movie (or a note what streaming service it’s on).

Marathon (2021) – This is a ‘mockumentary’ style movie about five amateur runners training for a marathon.

“An unprofessional documentary film crew follows five amateur runners as they train for Devil’s Canyon Marathon, an offbeat desert race organized by Ed Clap, a desperate shoe store owner pulling out all the stops to celebrate its fifteenth year.”

>>> Watch Marathon if you want a laugh at your own expense (especially if you’ve trained for a marathon).

Spirit of the Marathon (2008) – Documentary following six runners training for the Chicago Marathon. The group includes experienced ‘back of the pack’ runners, a first time marathon runner and professional runners.

>>> Watch Spirit of the Marathon if you need some inspiration before a long run or race.

Spirit of the Marathon II (2013) – Spirit of the Marathon II weaves the compelling stories of each runner – the trials and the triumphs – that paved their road to Rome. The documentary also features insightful interviews with marathon greats such as Stefano Baldini, Paula Radcliffe, Frank Shorter, and many others, as they offer perspective and insight into this legendary race.

>>> Watch Spirit of the Marathon part 2 if you loved part 1 and want more of the same.

“Lorena Ramírez of Mexico’s Rarámuri community lives a pastoral life — except when she straps on her sandals to compete as an ultramarathon runner.”

>>> Watch it if you read the book Born to Run or want to see a short, inspiring movie about an amazing female runner.

*CHECK OUT MY REVIEW OF LORENA HERE*

The Barkely Marathons: the race that eats its young (2015) – A famous prison escape sparks the idea for a cult-like race that has seen only 10 finishers in its first 25 years. This award-winning, oddly inspiring, and wildly funny documentary reveals the sports world’s most guarded secret.

>>> Watch it if you want to see an eccentric mountain man who hates runners host a brutal ultra marathon.

Brittany Runs a Marathon (2019) – Brittany Forgler, is everybody’s best friend ― except her own. Her partying, underemployment and toxic relationships are catching up with her. Too broke for a gym and too proud to ask for help, Brit is at a loss, until her neighbor pushes her to run one sweaty block. Soon, she sets an almost unthinkable goal: the New York City Marathon.

>>> Watch it if you are hanging out with a non-runner and get to pick the movie. This is a movie everyone can enjoy and isn’t centered around running or training 100%.

From Fast to Finish Line (2016)  – From Fat To Finish Line documents the journey of 12 formerly obese people who run a 200 mile Ragnar Relay Race. The film examines the trials, obstacles and triumphs that occur when tackling big mental and physical challenges.

>>> Watch it if you have run or want to run a relay race and/or if you need some team vibes after too may solo runs.

*CHECK OUT MY POST AFTER WATCHING FAT TO FINISH LINE HERE*

Without Limits (1998) – Movies about Steve Prefontaine, renowned distance runner who held every record from 2,000 through 10,000 meters come home in this acclaimed and inspiration-filled movie.

>>> Watch it if you want some inspiration and/or want to learn more about the legendary Steve Prefontaine.

Skid Row Marathon (2019) – Documentary following a running club based in the Skid Row area of Los Angeles, CA. A criminal court judge starts a running club on LA’s Skid Row, where he trains a motley but motivated group of homeless, addicted, and criminal men and women to run international marathons.

>>> Watch it if you like documentaries, running or both. I watched this one with my mom and she enjoyed it too.

*Check out my review of The SKID ROW MARATHON here*

Desert Runners (2013) – A diverse cast of non-professional runners attempt to complete the most difficult ultramarathon race series on Earth. Their dramatic journey takes them across the World’s most picturesque yet brutal landscapes, pushing their bodies, hearts and spirits through a myriad of external and internal obstacles.

>>> Watch it if you have a long run in hot weather coming up (because it’ll give ya some perspective).

Breaking 2 (2017) – After six months of scientifically advanced training, three of the world’s  most elite distance runners set out to break the two-hour marathon barrier.

>>> Watch it if you love science and running or if you’ve loved following Eliud Kipchoge’s journey to run a sub-2 hour marathon.

Unbroken (2014) – movie based on the true story of Louis “Louie” Zamperini, an Olympic distance runner and later airman during World War II. His plane crashed in the Pacific where it drifted for 47 days until he was captured by Japan and imprisoned for almost two years. Unbroken was directed and produced by Angelina Jolie.

>>> Watch it if you want to see a Hollywood film that’s runner adjacent. This is a good choice for non-runners too.

Boston: the Documentary (2017) – Narrated by Academy Award® winner Matt Damon, the film chronicles the story of the iconic Boston Marathon–from its humble origins with only 15 runners to the present day.

>>> Watch it if you appreciate history, the Boston Marathon or Matt Damon’s voice. 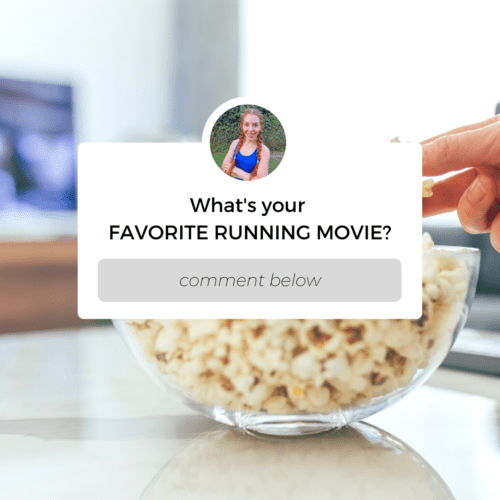 What’s YOUR favorite movie, documentary or series about running?

Disclaimer: Please speak with a medical professional before making any changes to your diet or exercise. I am not a doctor or registered dietitian. The views expressed are based on my own experiences, and should not be taken as medical, nutrition or training advice. Please note that affiliate links and sponsored posts may pop up from time to time. I truly appreciate your support. END_OF_DOCUMENT_TOKEN_TO_BE_REPLACED