Hi! I was super excited to chat with Jeff Galloway this week. I’m very familiar with the Run/Walk method from doing research on half marathon training plans AND from the Run Disney races (I’ve done several).

Galloway has several solid training plans to complete everything from a 5K to a marathon. He’s also the official training consultant for Run Disney and is at all the expos. 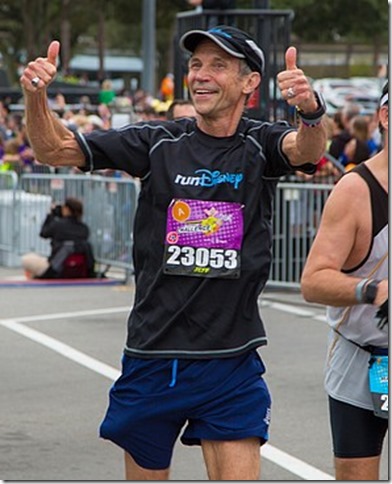 RER: How did you start doing Run/Walk training?

Galloway: I came up with the Run/Walk/Run method in 1974. I was opening the first specialty running store in the US. I was asked to teach a course for beginning runners. There was 22 people in the class and none had run in 5 years.

I broke the class up into 3 groups based on ability. I went out with eat group. At the end of the 10 week class all 22 finished a 5K or 10K. But what was most impressive was – NO Injuries.

The surprising thing is people can run faster with the right Run/Walk/Run – but on a hilly course it’s even more powerful. By putting walk breaks often enough you erase the fatigue. 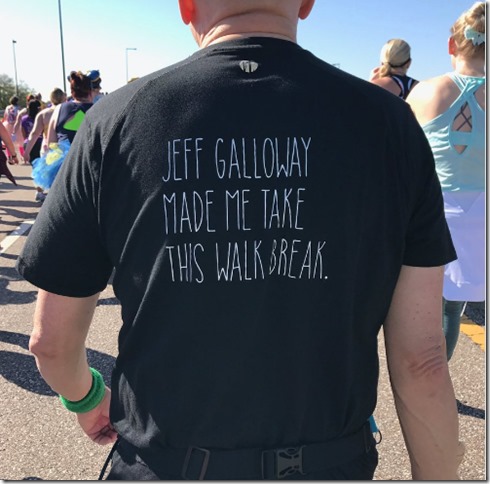 (seen on his FB page / sold by Raw Threads)

How long should you run? how long do you walk?

RER: How long should you run for? And how long do you walk?

Galloway: A common Run/Walk combo is run 2 minutes / walk 30 seconds. The walking breaks are at most 30 seconds. We’ve done studies and that have show that to be the best amount of time. I suggest people try various Run/Walk combinations until they find the one that works for them. 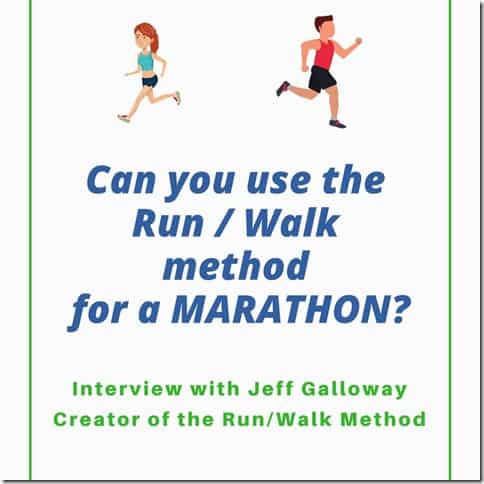 RER: Can a marathon runner use the Run/Walk method?

Galloway: Yes, the fastest marathon to note is one that improved from 2:33 to 2:28. They  inserted a walk break every mile.

I’ve heard from over 200 people who couldn’t break 3 hours and took a walk break every mile. The average improvement is over 13 minutes. For the sub-3 hour marathon crowd it depends on their pace, it’s usually running 6-7 minutes per mile and then walking 30 seconds.

Can you use the Run/Walk method to get faster?

RER: Can you use the Run/Walk method to get faster?

Galloway: Yes. Every week I hear from somebody who sets a personal record.  You pass people at the end of the race instead of being passed. And you’re not going to be out of commission after the race.

RER: I saw on Instagram you have a Run Camp in Big Sur? What is it?

Galloway: I’ve been going to Big Sur for two decades. It was wonderful to get to know the area. Half the time I stayed in Carmel and made friends there. It’s a great place to run. I decided to work with the Lamp Lighter Inn and start a winter retreat there. The last few years we’ve done this at the Inn.

Then the city was interested in expanding the area for more fitness activities. They proposed a series of weekend retreats. The wanted to bring runners and walkers and hikers to the area. The weather is spectacular. All of the sessions are outside.

It’s marketed to runners so it’s a Running Retreat. We are opening it up so runners can bring someone who is not a runner. 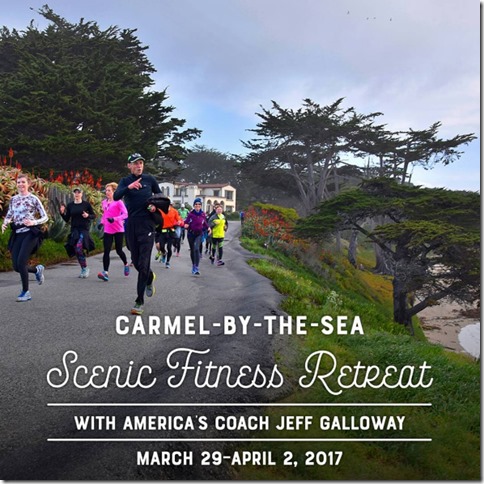 RER: I’ve read and heard from several sources that Big Sur is the Most Beautiful Marathon in the US – do you agree?

Galloway: I originally went to Big Sur with Runner’s World. The race officials heard my clinic and asked me to come back. I love the event. I really appreciate the people who put it on.

It’s the most beautiful course I’ve ever seen – and I’ve run 216 marathons!

Everyone has their favorite race course for one reason or another but for the beauty category it’s Big Sur.

Galloway: Yes, but those able to run at a training pace – it’s not very tough. If you choose the right run/walk/run intervals.

Strategic walk breaks placed early and often can cut the difficulty of the hills down. I’ve heard from several people who have set PRs at Big Sur by following my advice.

RER: Do you change up the Run/Walk intervals on a hilly course?

Galloway: Yes, you change it when there’s adversity. Big Sur has had a lot of diversity – there was one year with a lot of wind. The hills are another issue. In both cases if you don’t back off in those situations you’re going to use your reserves early and bad things can happen.

I’ve heard from over 10,000 runners who used it for the first time in the race. Only about 5 said it doesn’t work – but the odds are good. 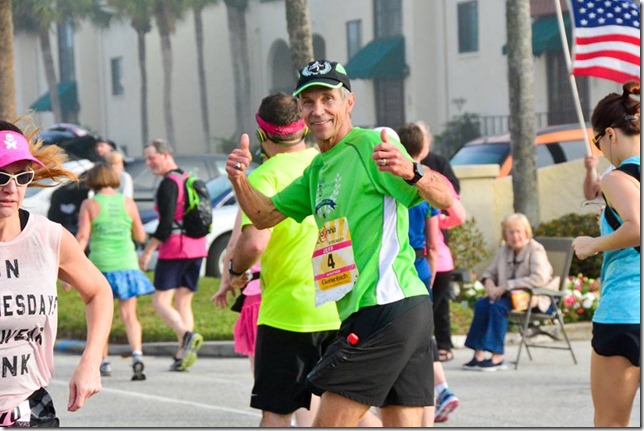 RER: I’ve seen a lot of Run/Walkers at Disney races. When their watch beeps for a walking break I’ve seen runners raise their hand so the people behind them know they’re stopping – is that part of what you teach?

The Galloway Team Members are the pace group leaders. The protocol is when a beeper beeps the leader tells the people to get to the side of the road.

Galloway: We love to help people improve the quality of life through running. If anybody has questions please reach out. 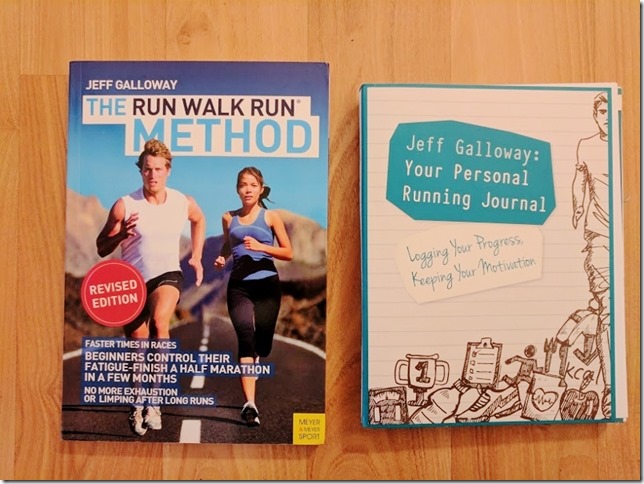 The running journal has tips and a clear breakdown for 52 weeks of running and space to take notes. 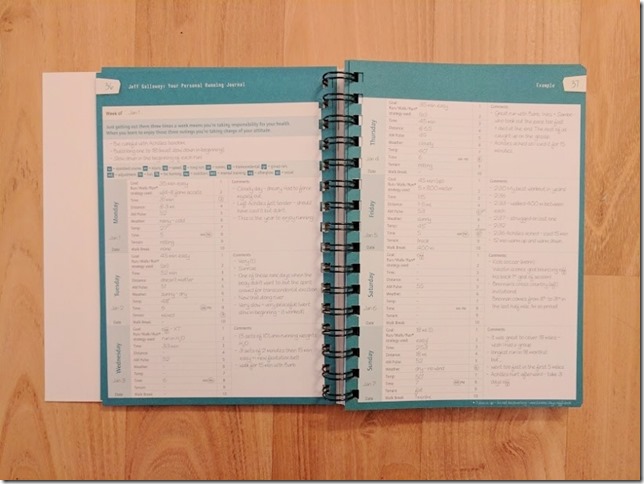 Running Coach Jeff Galloway on social and his books

Question: Have you ever tried the Run / Walk method?

What are your intervals?

Do you use a journal to track your running and eating?

Disclaimer: Please speak with a medical professional before making any changes to your diet or exercise. I am not a doctor or registered dietitian. The views expressed are based on my own experiences, and should not be taken as medical, nutrition or training advice. Please note that affiliate links and sponsored posts may pop up from time to time. I truly appreciate your support. END_OF_DOCUMENT_TOKEN_TO_BE_REPLACED