Disney races start super early so I had a ridiculous wake up call two days in a row. I’m feeling it now! So.So.Tired. But race morning I was super excited. I decided to run as Anna from Frozen and made my costume the day before. I had all the supplies, but spent a lot of time on the cape Saturday. 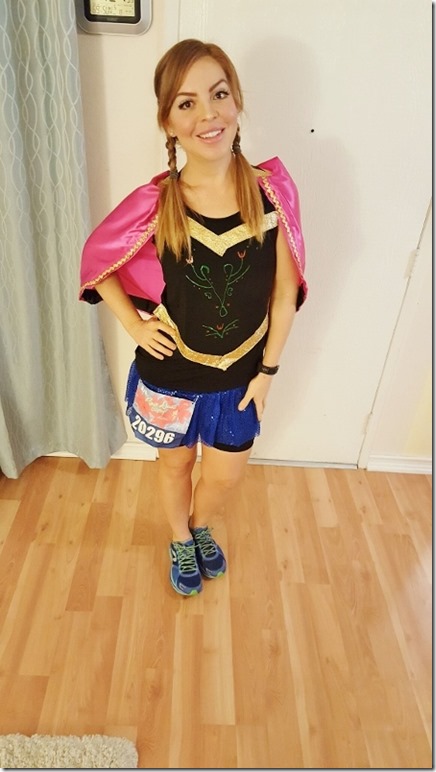 (I’m going to do a whole post on the running costumes soon. Today we’re just talking about the race.)

I ran this race solo but I knew the drill from previous Disney races…. Park in the structure, Walk to the Start, Leave time for Porta Potties. 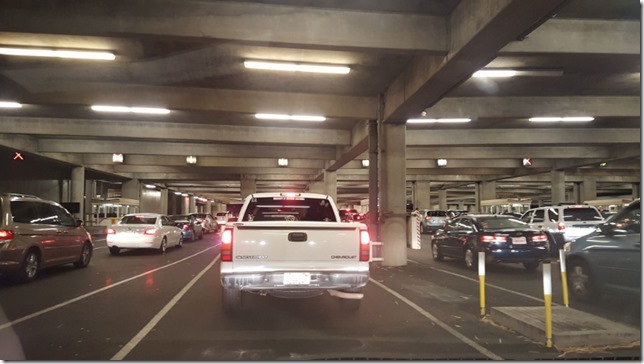 Unfortunately I didn’t leave enough time and was still in line at the portas when the race started. I considered just holding it but that is never a good idea while running. 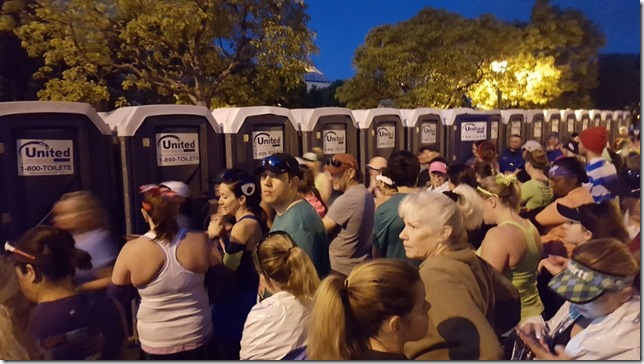 I ended up being too late for corral B too and got in with corral C. Since I was already late and just waiting I had a volunteer snap a picture. 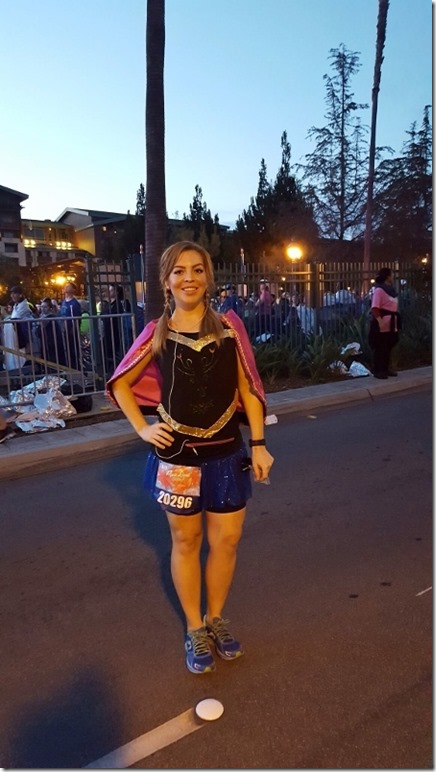 Then, I finally got into the corral and waited for the countdown to run! 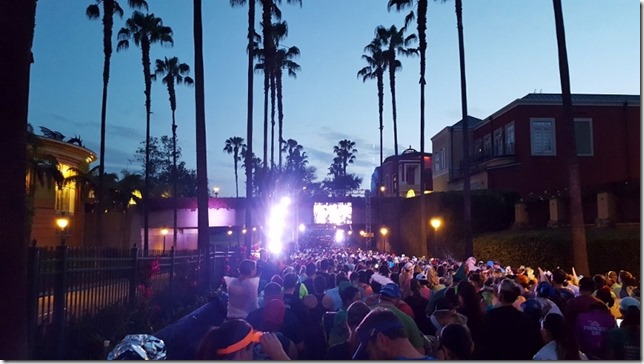 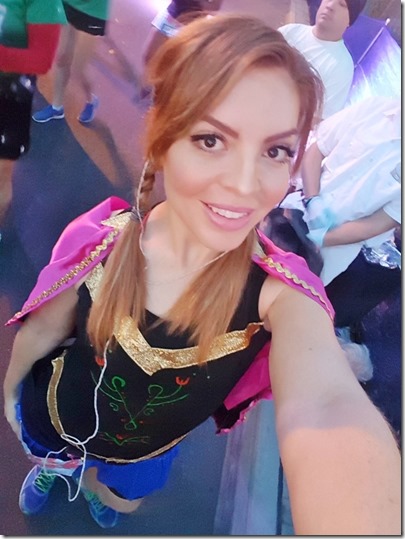 I really love Disney races. Yes, they are expensive and the half marathon distance Disneyland races end up just randomly touring Anaheim, but I love that everyone is so pumped and dressed up and there’s just such a ‘I’m here to have FUN’ attitude. That doesn’t always happen in other road races.

The bad thing about this fun factor is many people are walking, stopping to take pictures, stopping because their costume needs to be adjusted or to find friends. And I confess, I did this for the 10k with my mom – the whole stopping to look for her thing (not the costume adjustment because the Tigger costume was pretty comfy). I made sure to get out of the way before just stopping. People doing the Galloway Method put up their hand before they stop as a signal to runners behind them – this is a GREAT idea! This is just a reminder it is really hard if you want to just RUN the whole time because you end up dodging around people for miles and miles (which adds to fatigue) if you miss your corral.

I guess the main thing to remember is line up at the very front of corral A if you are there for time OR just have fun! 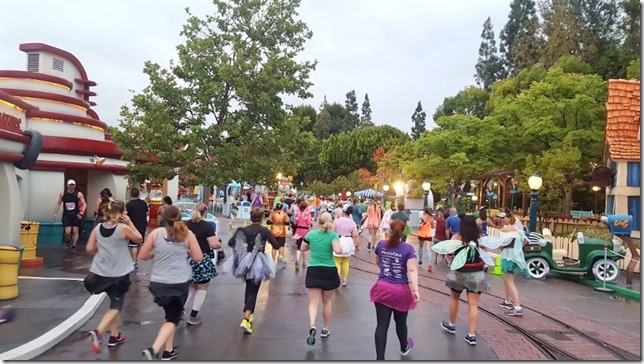 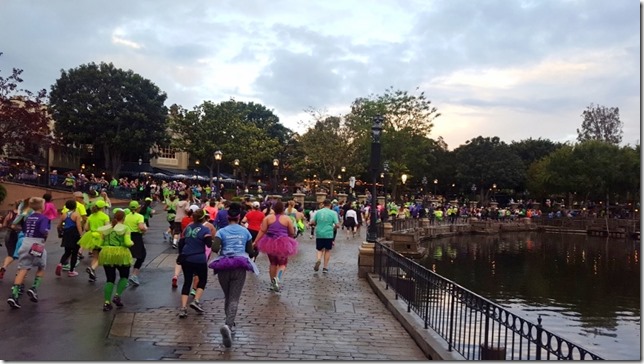 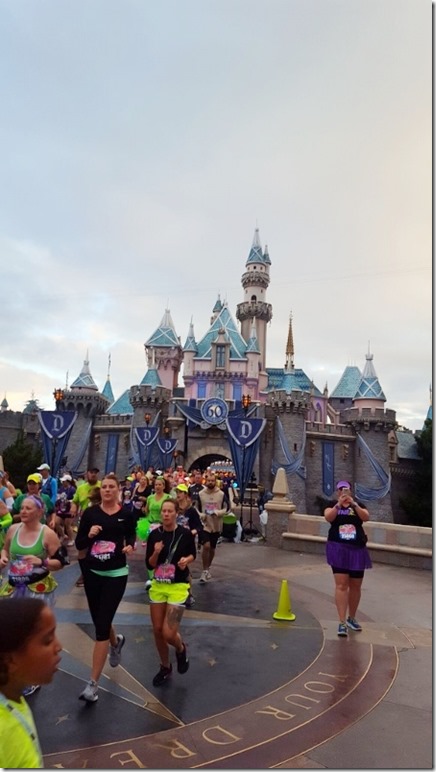 I didn’t want to wait in line at the Castle for a picture – the line was LONG, so I asked a runner toward the back of the line to snap this one. The angle just shows the Matterhorn in the background, but I kind of love that!! 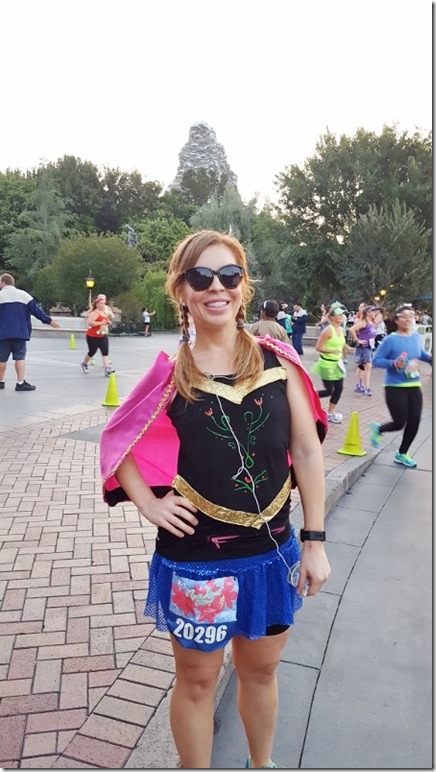 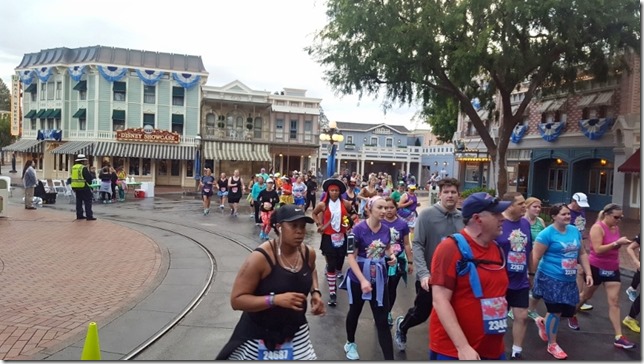 I asked a spectator in California Adventure to take a picture of me. I wanted a running pic of me in the Anna costume and this is probably the best one I got. 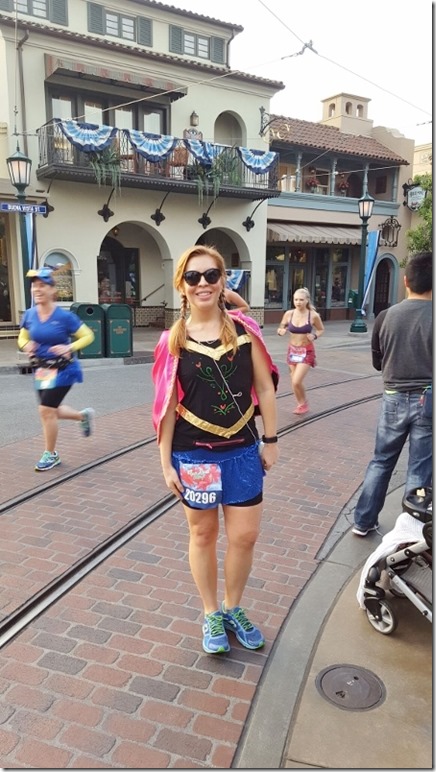 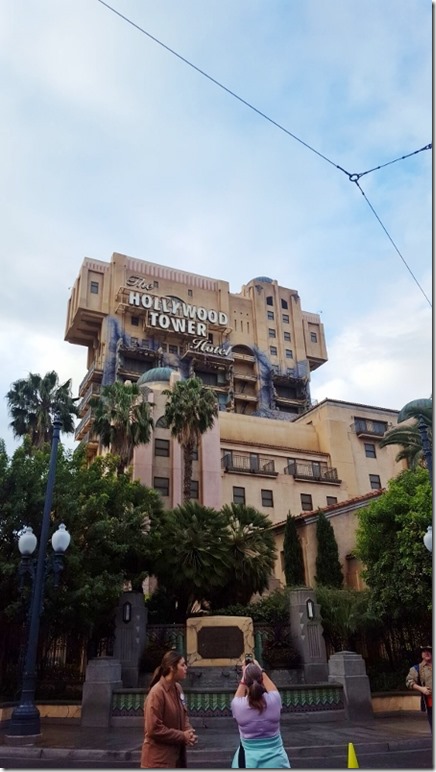 I ended up seeing the Sparkle Athletic girls on the course and ran with them for a few miles. They were just running for fun so we talked and walked through aid stations. We chatted so much it was mile 12 before I knew it! 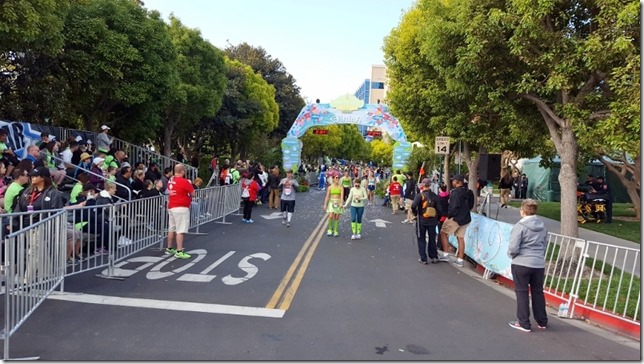 Disneyland Tinkerbell Half Marathon finish time of 1:56:19. I’m happy it was under 2 hours considering my slow start and talking miles with the girls. It was so much fun – first doing the 10K with my mom and then running the half marathon as Anna. I love seeing everyone else’s costumes too. 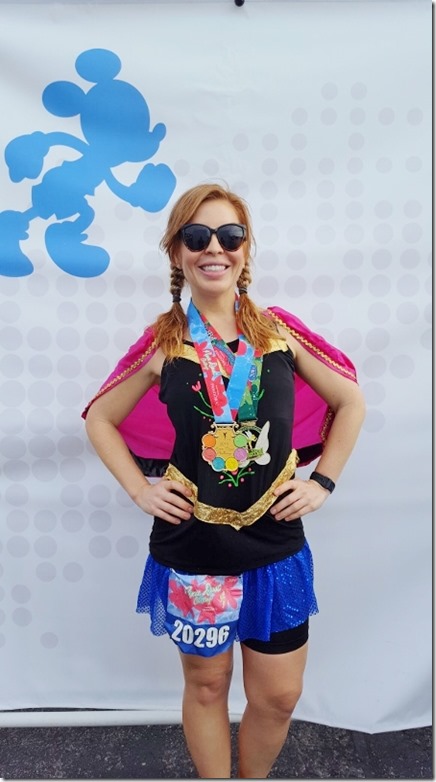 As I passed the finishers chute and grabbed water I met a few Instagram followers too! I met so many awesome readers this weekend at the expo and at both races!! Thank you for saying ‘Hi’! (And sorry if I was super sweaty and gross when we met.) 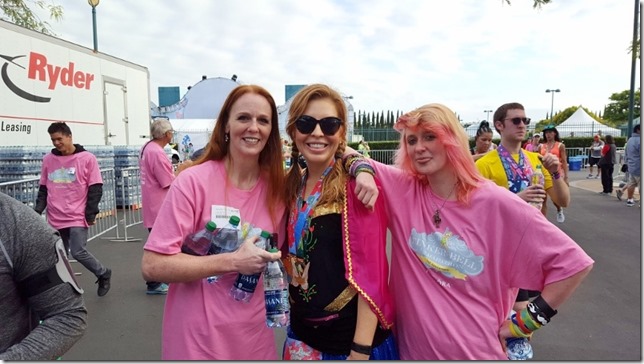 When you complete both the Tinkerbell 10k AND half marathon you get an extra medal for doing the Pixie Dust Challenge. Check out all this bling I scored!! 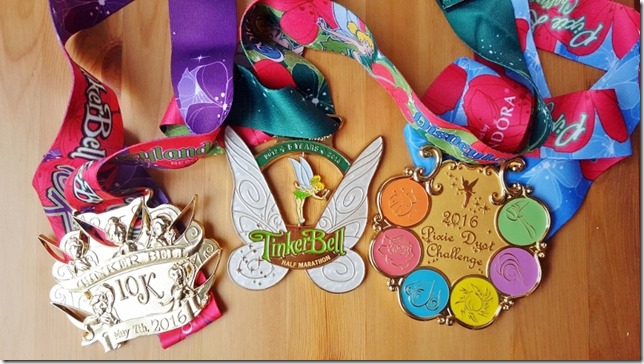 You’re supposed to wear your race medal for the rest of the day of a race. It’s a running rule. But I think all these medals would give me a hernia so I opted out. I hope the president of running doesn’t kick me out of the club. 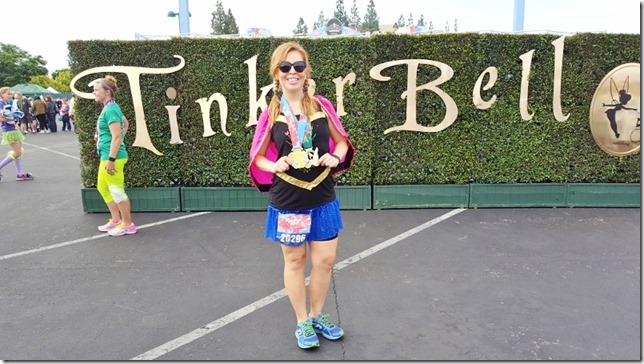 Oh, and I have to say it was weird running with a cape, but also fun. It kind of started to stick to my back sweat once I got warmed up and I wasn’t sure if I was ruining the costume with a super sweat stained pink thing stuck to my back. Ha! I just thought of myself as a superhero who’s power was to sweat a ton so I’d slip away from my enemies.

It totally worked out and didn’t fall apart or look tragic at the end. Yay for my random costume making ability to throw stuff together! (I’m super not crafty so this is basically the equivalent of you building a house from scratch.) 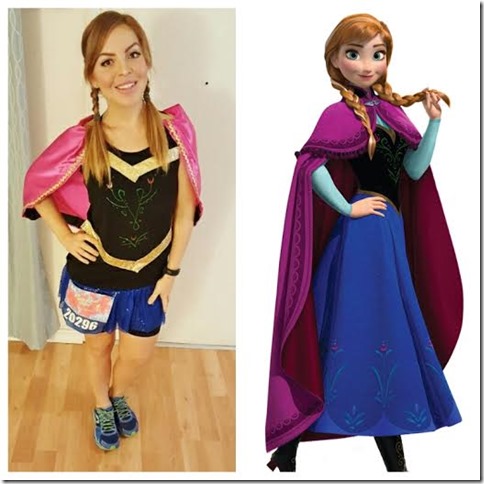 Question: What was the last crafty thing you did?

Disclaimer: Please speak with a medical professional before making any changes to your diet or exercise. I am not a doctor or registered dietitian. The views expressed are based on my own experiences, and should not be taken as medical, nutrition or training advice. Please note that affiliate links and sponsored posts may pop up from time to time. I truly appreciate your support. END_OF_DOCUMENT_TOKEN_TO_BE_REPLACED