The second race of the Walt Disney World Marathon Weekend Dopey Challenge was a 10K on Friday. I took a lot of video during the race, but it was super dark so it’s hard to actually see the race course or really anything. But I did get a lot of great race photos, so I’ll post some video to my Instagram stories and save the to the highlights. Check out @RunEatRepeat Instagram highlights under ‘Dopey Challenge’ to see that. 1.  I got to the shuttle bus early and no other runners were on it yet (I woke up the same time as the day before but got ready faster because I didn’t have to curl my hair). I asked the hotel coordinator to snap a ‘before’ picture. ‘Before’ as in before I get my Belle running costume sweaty and disgusting.

I dressed at Belle from the beginning of Beauty and the Beast aka ‘countryside Belle’ in her simple blue dress. I wore a running tank with fabric for the collar/sleeve, a blue Sparkle Skirt and an apron.

I’ve seen some runners in this costume carry a book and pretend to read it as they ran, but it was already a Christmas miracle that I dragged my redhead all the way from California with 4 running costumes, 4 sets of running gear (I can’t re-wear anything because I’m a sweat ball) and 2 pairs of running shoes in my carry-on. So, I don’t have the time for a prop book. Plus, I listen to audio-books while running and think Belle would be open to that new efficient technology. 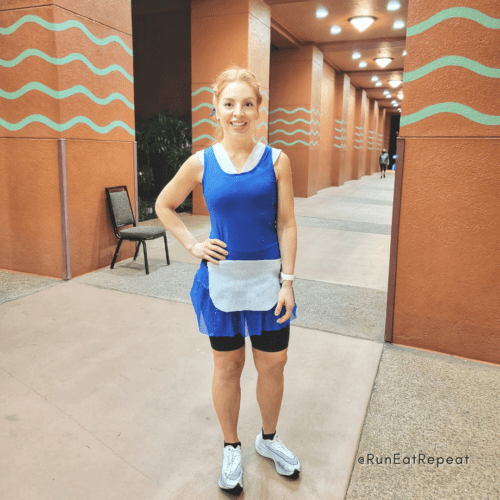 2. There’s a security check point when you get on the bus and then a lil walk to the start line area. We pass right in front of Epcot and a lot of people stopped to snap selfies here. I did an Instagram video most days (did you see it? Watch my IG stories because it’s kinda the best stuff). 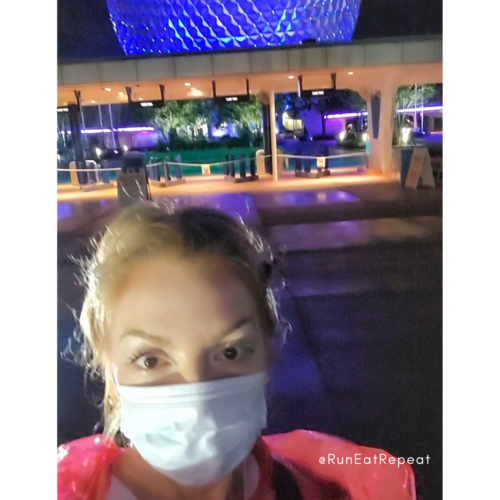 3. This isn’t a top moment – but I’m grateful it happened for the 10K and not the full marathon… so overall it’s a good thing.

When we got to Epcot I realized my running watch was on 10% battery. i debated throwing it in my drop bag since it’d definitely die during the race. I think I had it plugged into a broken usb outlet at the hotel. Womp womp.

I ended up wearing it for the race, but it shut down before I finished.

Aaand – I realized it was only 1:14AM pacific time (it didn’t update time zones auto-magically like phones do). Just seeing that it was the middle of the night and I was about to run 6.2 miles made me dizzy. On the bright side – go me… for waking up a 2nd day in a row at such a ridic hour. We can do hard things!

4. I hit up the restrooms outside of Epcot, dropped off my bag with gEar Check and headed to the start line.

I was there with plenty of time to get into my corral and listen to the announcers hype the crowd of runners. (Spoiler alert: My timing wouldn’t be as good later in the race weekend) 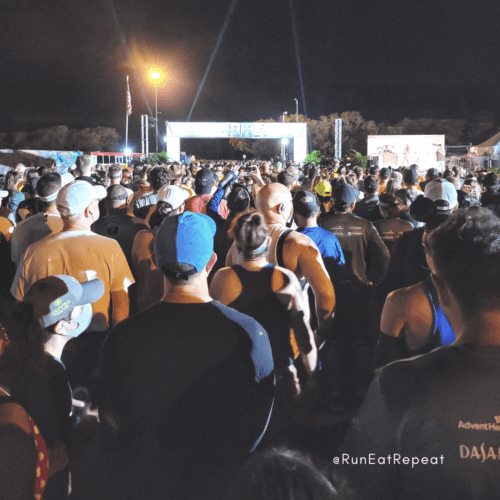 5. The race started at 5AM and sunrise wasn’t until 7:19AM – so the entire race was in the dark. This made it hard to take photos or video to share tips and notes on the course. I put together a super short video that’s on my Instagram if you don’t mind dark video – @RunEatRepeat.

Luckily, the official race photos had some winners. 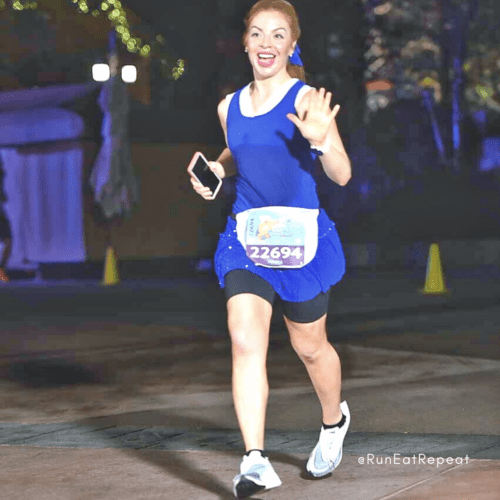 6. The 6.2 mile course started in the Epcot parking lot. The first 3 miles were on dark service roads. There were character photo stops spread out along the course (including outside of the theme parks). There was a quick run through Hollywood Studios around mile 4. And the race’s big finale is running through World Showcase in Epcot. The finish line is just outside the park after you pass under the iconic dome. 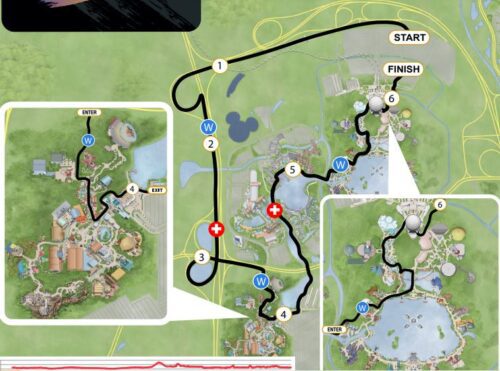 7. I stopped for a few character photo ops… basically any time there was a short line OR when it was a character I really wanted a photo with.

Near the end of the race in Epcot I stopped when I saw Winnie the Pooh, but after a few minutes the cast-member handler of Pooh said he was taking a break. We were welcome to wait, but it was going to be a while. I took the L and got back to running.

I did get one decent character photo from this race though… 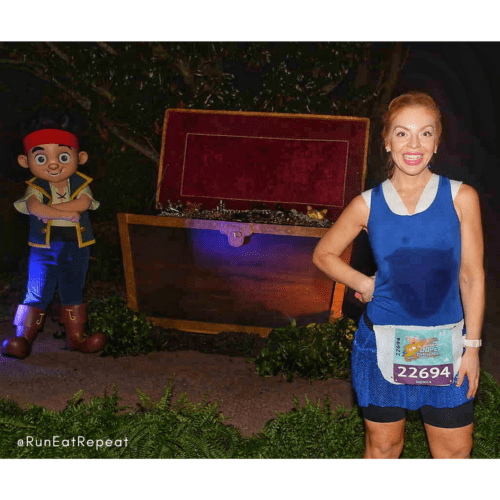 8. Overall, the race course was flat and not too crowded.

It was good running weather for Florida (note: it’s not ideal running weather in general, but as good as it gets in Florida. I’m born, raised and living in Southern California and am not used to humidity or actual cold – so I appreciate when it’s mild). It was sprinkling as I walked to the bus, but had stopped by the time I got to the starting line.

And the Run Disney community is always a fun, welcoming crowd – so I love the good vibes. 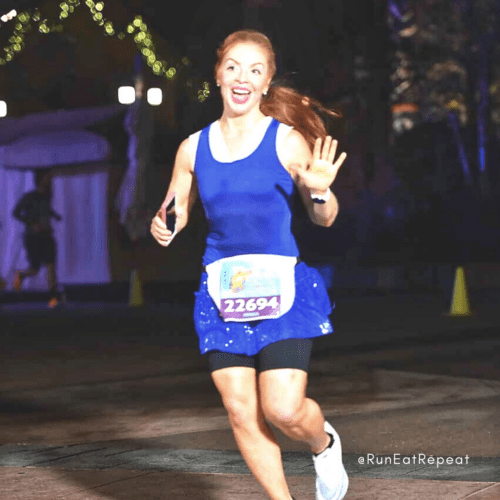 9. Post-Race I got a picture with my medal, found the bus back to my hotel and was back before sunrise! 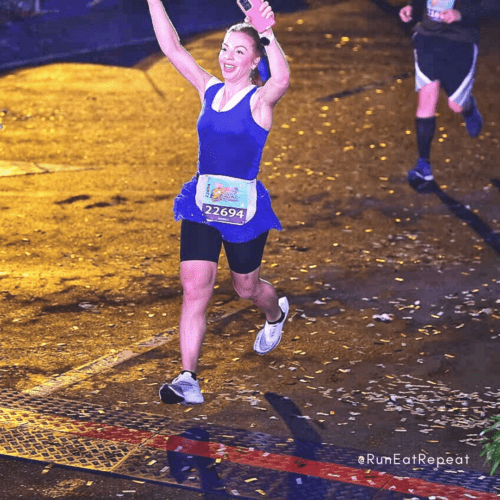 10. I stayed at the Dolphin Resort the night before the 5K and 10K races (more on hotel & other prep coming in a separate post).

After a quick shower we hit up the hotel’s breakfast buffet. It was a pretty small set-up… scrambled eggs, bacon, sausage, potatoes – served by a chef. Self serve – muffins, pastries and fruit. But our waitress mentioned we could order eggs cooked another way from her – so I ordered eggs from her and hit up the buffet for some treats. 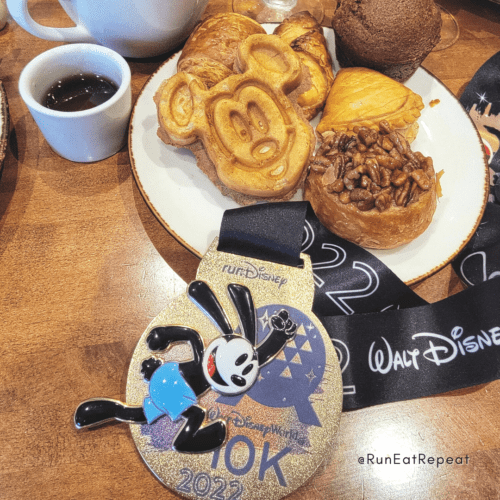 Next up: Disney World Half Marathon Recap! Make sure you’re following @RunEatRepeat on Instagram for that and more.

Disclaimer: Please speak with a medical professional before making any changes to your diet or exercise. I am not a doctor or registered dietitian. The views expressed are based on my own experiences, and should not be taken as medical, nutrition or training advice. Please note that affiliate links and sponsored posts may pop up from time to time. I truly appreciate your support. END_OF_DOCUMENT_TOKEN_TO_BE_REPLACED