Review of the book – It Ends With Us by Colleen Hoover

I listened to It Ends With Us on Audible (you can get it here). It’s also available on Amazon and Kindle here or your local book store.

After I finish a book I always want to talk about it but I’m not organized enough and don’t have enough friends to start a virtual book club… so I do these reviews to recap and share with you.

Notes for this review: 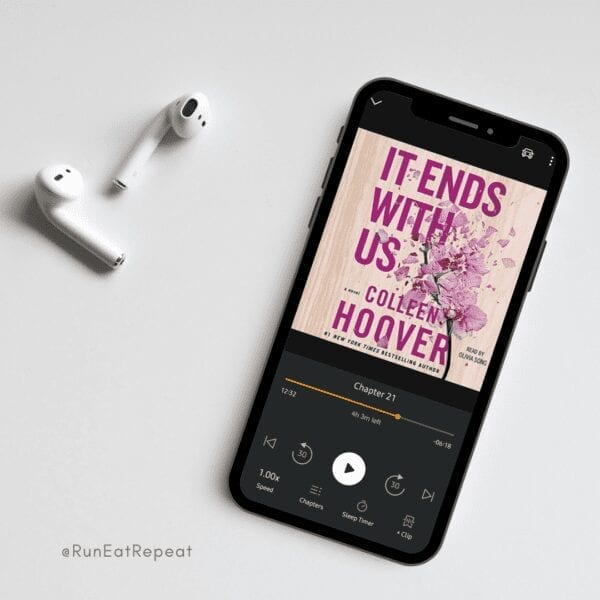 It Ends With Us – Summary of the Plot and Recap

It Ends With Us – Audio Book Review

I listened to most of the book while running. I think it’s a good listen for running, walking, cleaning… basically activities where it’s nice to chat as you go. It wasn’t super suspenseful but I did finish it pretty fast and never got bored.

It Ends With Us Summary from Amazon:

Lily hasn’t always had it easy, but that’s never stopped her from working hard for the life she wants. She’s come a long way from the small town in Maine where she grew up—she graduated from college, moved to Boston, and started her own business. So when she feels a spark with a gorgeous neurosurgeon named Ryle Kincaid, everything in Lily’s life suddenly seems almost too good to be true.

Ryle is assertive, stubborn, maybe even a little arrogant. He’s also sensitive, brilliant, and has a total soft spot for Lily. And the way he looks in scrubs certainly doesn’t hurt. Lily can’t get him out of her head. But Ryle’s complete aversion to relationships is disturbing. Even as Lily finds herself becoming the exception to his “no dating” rule, she can’t help but wonder what made him that way in the first place.

As questions about her new relationship overwhelm her, so do thoughts of Atlas Corrigan—her first love and a link to the past she left behind. He was her kindred spirit, her protector. When Atlas suddenly reappears, everything Lily has built with Ryle is threatened.

It Ends With Us – Links and Info

If you or someone you know is in a domestic violence situation and needs help – a list of resources are below.

Note – If you suspect your internet usage is being monitored, save the phone number below under a different name and call instead of going to the website (and/or delete the phone call after if your bill lists the numbers you called).

Disclaimer: Please speak with a medical professional before making any changes to your diet or exercise. I am not a doctor or registered dietitian. The views expressed are based on my own experiences, and should not be taken as medical, nutrition or training advice. Please note that affiliate links and sponsored posts may pop up from time to time. I truly appreciate your support. END_OF_DOCUMENT_TOKEN_TO_BE_REPLACED